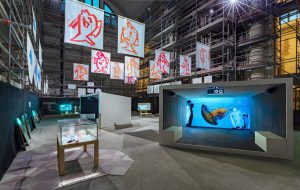 Joan Jonas’s exhibition Moving Off the Land II conjures a captivating underwater universe in which the artist pays tribute to the ocean’s mythologies, biodiversity, and delicate ecology. Comprising video installations partially produced whilst in residency at the Alligator Head Foundation in Portland, Jamaica, sound, drawing, sculpture, as well as a performance at the Museo Nacional del Prado Auditorium, this multi-layered exhibition enchants and simultaneously points to our current moment of ecological urgency.

Curated by Stefanie Hessler, Moving Off the Land II dives deep into the ocean water, swims with the fish inhabiting it, and weaves in literature and poetry by writers who have homed in on the liquid masses that cover two thirds of the planet. Jonas’s footage from Jamaica, for instance, points to the threats of overfishing and algae bloom as waters around the world continue to warm. In the installation, a beluga whale in the Massachusetts Aquarium seems to make contact with visitors, and the seas are inhabited by ancient and contemporary mermaids. Following the methodology that has gained her lauded reputation, Jonas combines her moving images with poetry and prose by writers like Emily Dickinson and Herman Melville with texts by Rachel Carson and Sy Montgomery. In Moving Off the Land II, Jonas creates a confluence of the poetic and the observational, of mythological folklore, contemporary narratives, and scientific studies, inviting viewers to plunge into a spellbinding experience.

On a unique occasion, Jonas’s performance Moving Off the Land will be presented at the Museo Nacional del Prado on February 26. Footage filmed by Jonas in aquariums around the world as well as on the coast of Nova Scotia, and videos shared with her by the marine biologist and oceanographer David Gruber, form the backdrop of this work. In a delicate dramaturgy, Jonas conjures an aquatic universe of mythological and real figures in which new stories of sheer beauty and ecological urgency emerge. Jonas is joined onstage by the celebrated composer, improviser, and electronic musician Ikue Mori and performer Francesco Migliaccio.

TBA21 is a leading international art foundation, founded in Vienna in 2002 by the philanthropist and collector Francesca Thyssen-Bornemisza, representing the fourth generation of the Thyssen-Bornemisza family’s commitment to the arts.

Over the years, TBA21 Foundation has formed a dedicated artistic research, production, exhibition, dissemination, and affiliated public programming, with a particular emphasis on artworks that investigate pressing topics of our time such as the interconnectedness of nature, culture, politics, gender, and interspecies relationships. This ongoing practice has led to the formation of a unique collection, which is now being made accessible to audiences in Madrid through a series of exhibitions and activations at the Museo Nacional Thyssen-Bornemisza.

“As each year passes, I hope that TBA21’s program in Madrid brings more and more content and consciousness to the already vibrant cultural life of this city. We bring with us nearly eighteen years of hard work and commitment to initiating and developing our very own method of art practice. It remains our firm belief that when approached this way, the arts can become a powerful agent of change and speak to the powers above and the activism below by reaching a new creative common ground of concern.” Francesca Thyssen-Bornemisza

Moving Off the Land II was commissioned and produced by the TBA21–Academy, which is an official offshoot of Thyssen-Bornemisza Art Contemporary. Building on the Foundation’s well-established practice of artistic research and production, the Academy fosters a deeper understanding of the ocean through the lens of art by venturing into the spheres of science, policy and education. Established in 2011 and directed by Markus Reymann, the Academy’s program is informed by a belief in the power of exchange between disciplines and in the ability of the arts to serve as a vessel for inspiration, change, and action.