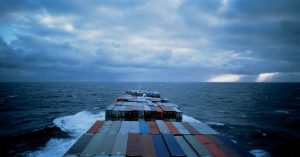 This monographic exhibition explores the legacy of Allan Sekula (American, 1951–2013) by charting the artist’s research into the world’s largest and increasingly fragile hydrosphere: our oceans. The exhibition title is a reference to the figure of Okeanos—the son of Gaia, the mythical goddess of the earth—who ruled over the oceans and water. His aquatic perspective—from and of the oceans—represents a shift of focus that counters the terrestrial ecologies of most contemporary discourses on the environment.

Francesca von Habsburg, founder of TBA21, notes, “Allan Sekula’s photography, films and writing open a window to the reality of life at sea. Sekula not only highlighted the ugliness of exploitation, he also revealed the beauty of the ordinary, of the everyday. His thoughtful work is a testament to resistance and to hope, and it plays a vital role in understanding the challenges facing our embattled oceans.”