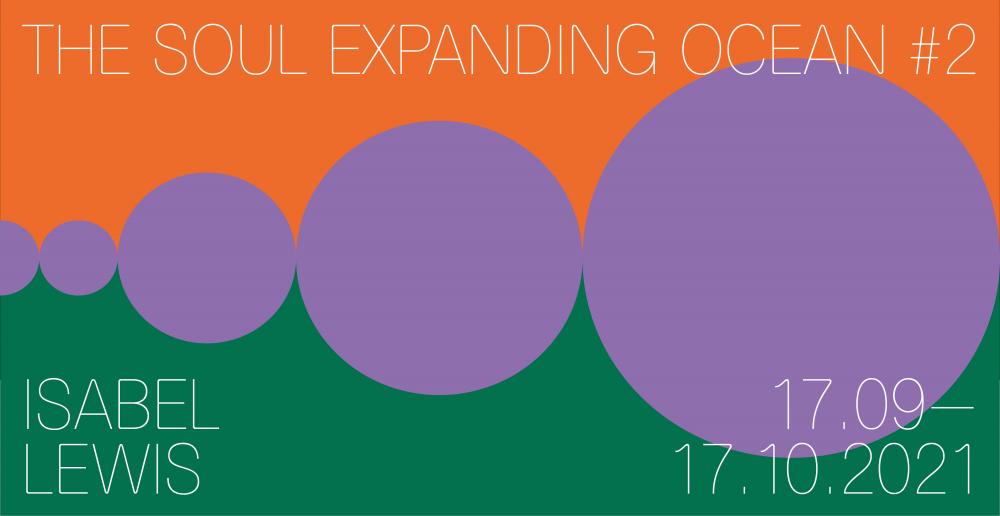 Opening September 17th, Ocean Space showcases a newly commissioned work by artist and choreographer Isabel Lewis that invites participants and visitors to dance through the Ocean.

The exhibition-performance is unveiled in the second chapter of The Soul Expanding Ocean, a series of exhibitions by Ocean Space’s 2021–2022 curator Chus Martínez. The series presents Martínez’s research, proposing that humanity approach the Ocean through the lens of a new epistemological universe conceived under sensual values, a mandate of care and principle of love. The exhibition-performance will run over the course of five consecutive weekends, every Friday and Saturday from September 17 to October 17, 2021.

The Soul Expanding Ocean #2: Isabel Lewis is an invitation to attune to our continuity with the Ocean to transform and articulate a different relation. Lewis asks participants to be careful with the language pertaining to the Ocean, be aware of the questions it poses and open to unexpected findings. The Ocean, then, appears in front of participants and visitors as a method, a pedagogy that leads individuals into another form of relating to nature. One that gives nature agency, one that acknowledges the differences of the lives that move and act and think and sense besides humans. Art and artists are guiding humanity into the recovery and rehabilitation of its current relation to the Ocean. For this reason, a reprogramming of bodies is necessary to become more saliently cognizant of the human potential to be oceanic. Hands, skin, eyes, noses, ears, all organs need to learn to feel the Ocean even when the Ocean is not there, yet.

Coinciding with the Biennale Musica in September, TBA21–Academy‘s new commission is a ballet that takes up the dynamics of biological-physical interactions in the Ocean as a choreographic strategy. A ballet is a formalized set of movements that adapt the body to the flow of sound. This time the flow is provided by the Ocean and the mission is to adapt the bodies to its rhythm. For this reason, Lewis proposed an open call in order to initiate a search for professional and non-professional dancers. Those that know the codes stand for the knowledge possessed about the world. Those who are considered amateurs stand for the multiple possibilities of bonding differently with the Ocean. It is in this dialogue between the known and the unknown, between forms historically inherited and new languages to be born, that the piece approaches the Ocean. Lewis invites participants and visitors to the church of San Lorenzo and its campo as if they are inside the waters of the Oceans, the bodies taken by the currents and the voice integrated in the piece as a political component, a marker of Venice’s long traditions of choirs, communal politics, music and sound as an identity trait. So, where better than in Ocean Space to propose a dance for an entity that always moves?

This piece addresses a crucial question: how to reconcile in a coherent manner one’s artistic activity as a choreographer and dancer with one’s political commitment towards nature and the Ocean and the role artists granted themselves in the transformation of society? Lewis describes her artistic work “as a long process in developing methodologies and epistemological approaches that acknowledge no mind/body duality and integrate multiple modalities of knowledge acquisition in order to generate new approaches to questions of human flourishing (and what inhibits it).

Moving from a place of critical reflection on the thought systems of contemporary western society and the ways they are embedded and embodied with dangerous effects in our biosocial interactions, I work with choreography to reimagine and put into action alternative models of relation and sociality between human and more-than-human agents.” As Venetian musician Luigi Nono asserted in 1969, for him there was “no difference between music and politics”, and so is the case for Lewis. There is no difference between dance and politics, since through dance Lewis aims to contribute to an epistemological struggle and help to push it forward to a new way of sensing. Lewis’s performance-exhibition is a manifestation of the research conducted by Chus Martínez, when she led TBA21–Academy’s flagship program The Current II under the title The Soul Expanding Ocean from 2018-2020.

This exhibition is commissioned and produced by TBA21–Academy and supported by ifa | Institut für Auslandsbeziehungen and Callie’s, Berlin.