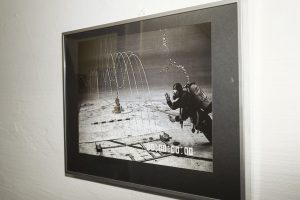 TBA21–Academy is proud to present its first major research commission, conceived and realized over three years by the artist and fellow of The Current Armin Linke. The investigative exhibition Prospecting Ocean, which was developed in collaboration with the Istituto di Scienze Marine (CNR-ISMAR), explores contemporary challenges facing our oceans. Drawing up rare footage of the deep-sea and interviews with leading scientists, policymakers, legal experts, and activists, the project scrutinizes the aesthetics of technoscientific apparatuses and grapples with the tension between ecological protection of our oceans and political and economic exploitation.

Linke’s Prospecting Ocean presents a rich choreography of newly filmed footage and archival materials installed in the former headquarters and laboratory spaces of CNR-ISMAR, including several multi-channel video installations and a new series of photographs. A montage of rarely seen scientific footage of the ocean floor—captured by remotely operated underwater vehicles (ROV) at a depth of up to 5,000 meters—visually juxtaposes the “natural” seabed with the machinery used to extract specimen for research and deep-sea minerals for industrial use. Along with these highly detached images of tools and ostensibly clinical incisions in the seabed, the exhibition presents imagery filmed at United Nations assemblies, in international law conferences, at marine research centers, and at sites endangered by sea-level rise and now also by seabed mining in the case of Papua New Guinea. Linke exposes submarine and terrestrial sites that are commonly invisible and accesses gatherings of decision makers that are usually closed to the public. Scrutinizing the infrastructural apparatuses administrating the seabed, he deconstructs the idea of a marine-based blue economy and policy commonly supported by governments.

At CNR-ISMAR the footage filmed by Linke and his team is presented alongside behind-the-scenes interviews with leading biologists, geologists, and policy makers, as well as footage of activist movements in Papua New Guinea, inviting the viewer to consider the implications of oceanic excavations for both the environment and communities. Linke lays bare an intricate network of dynamics, dissecting how information is negotiated between scientific, legal, and economic entities and institutions, on both local and international levels.

Prospecting Ocean also features a selection of primary documents and books from the CNR-ISMAR historical library selected by the institute’s scientists and critical texts analyzing the legal, political, and economic infrastructures that preside over the allocation of ocean resources. As a whole the project scrutinizes the administration of the oceans and exposes the simultaneous fascination with and alienation from technologies that map, visualize, and exploit resources in the sea.

A publication with additional research and newly commissioned texts, edited by Stefanie Hessler, will be launched in early 2019.

Commissioned and produced by TBA21–Academy, in partnership with the Institute of Marine Sciences of the National Research Council of Italy (CNR-ISMAR)