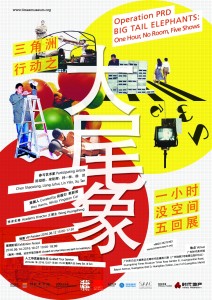 The “Big Tail Elephants Working Group”(aka Big Tail Elephants), comprised of artists Chen Shaoxiong, Liang Juhui, Lin Yilin, and Xu Tan, was active during the 1990s in Guangzhou, the heart of the Pearl River Delta region. From 1991 to 1996, Big Tail Elephants self-organized five exhibitions in temporary spaces that varied from cultural palaces, to bars, as well as the basements of commercial buildings and outdoor venues. In 1998, collective presentations of the group’s recent works were staged at Hong Kong Polytechnic University and Kunsthalle Bern. After 1998, Big Tail Elephants received a number of invitations to participate in international exhibitions but stopped working together as a group.

The decade from 1990 to 2000 saw distinctive developments arise within the once-peripheral contemporary art scene of the Pearl River Delta region, viewed in part as a result of the combined forces of China’s explosive economic growth also found throughout Asia in general—and the twin projects of modernization and urbanization. Witnessing and experiencing this complex set of realities, Big Tail Elephants strove for the autonomy and legitimacy of artists and artistic production, and made positive impacts on the cultural landscape of southern China in the 1990s.

Operation PRD – Big Tail Elephants: One Hour, No Room, Five Shows has reproduced more than 20 of the group’s works based on archives and documentary materials. “One Hour” is taken from Liang Juhui’s performance One Hour Game (1996) enacted in the elevator of a construction site in Guangzhou. “No Room” is responding to the group’s fourth exhibition in 1994 which bore the same title. The title reflects the absence of contemporary art institutions and spaces in the 1990s, while also alluding to the guerrilla-style spontaneity of the group’s exhibition initiatives. “Five Shows” emphasizes the five exhibitions organized by the group in non-art spaces between 1991 and 1996. Exhibitions and sites of action were thought of as laboratories for their artistic experiments, and these fleeting events offer prescient insight into the socio-political context of contemporary art in China after the 1990s, and its pointed and deliberate lack of ideological appeals.