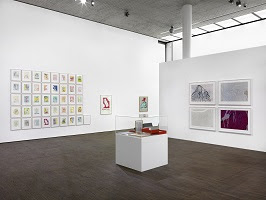 The complete editioned works of Sigmar Polke, one of the most important contemporary artists, is on show in Berlin, featuring approximately 200 works from the collection ‘Kunstraum am Limes’.
The artist’s editioned works hold a special place within his oeuvre. For Sigmar Polke (b. 1941 Oels, now Oleśnica/Poland, d. 2010 Cologne), editions were a further opportunity for intensive and excessive variations on his experiments, allowing him to stage a confrontation without end between himself and the world. Like an alchemist, he expected different techniques to bend to the will of his creative ego and so his editioned works comprise objects, books, portfolios, photographs, photocopies, collages, and numerous prints.

The exhibition is curated by Tereza de Arruda.