Städel Museum: Victor Vasarely “In the Labyrinth of Modernism” 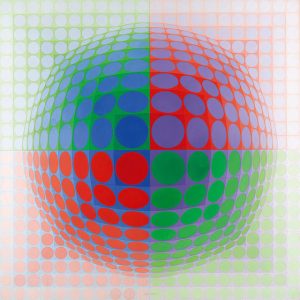 The retrospective presents the founder of the op art of the 1960s with more than 100 works. Victor Vasarely’s (1906–1997) oeuvre, however, spans more than 60 years and makes use of the most diverse styles and influences: key works of all phases of his production trace the development of the once-in-a century artist. Often reduced to his op art, the artist forged a bridge between the early modernism of Eastern and Central Europe and the avant-gardes of the Swinging Sixties in the West. He drew on traditional media and genres throughout his career, incorporating the multiple, mass production, and architecture into his complex work in the 1950s. The exhibition also looks back at Vasarely’s beginnings as an artist with such works as Hommage au carré (1929) or figurative paintings like Autoportrait(1944). The selection spans from early works like Zèbres (1937) and his Noir-et-Blanc period of the 1950s to the main works of op art such as the Vega pictures of the 1970s. The wide-ranging retrospective understands itself as a rediscovery of a crucial 20th century artist who reflects modernism in all its complexity like no other.

Next to important loans from the Centre Pompidou in Paris, the Tate Modern in London, the Solomon R. Guggenheim Museum in New York, or the Michele Vasarely Foundation, the exhibition presents not least the dining hall created for the Deutsche Bundesbank as an outstanding example of Vasarely’s room-spanning architectural designs. Victor Vasarely. In the Labyrinth of Modernism was prepared in close collaboration with the Centre Pompidou in Paris, which will present the exhibition Vasarely, le partage des forms immediately following the show in Frankfurt. The two exhibitions share crucial loans like the dining hall, which has been especially dismantled for the presentation in Frankfurt.

An eponymous catalogue edited by Dr. Martin Engler with contributions by Martin Engler, Györgyi Imre, Michel Gauthier, Jana Baumann, and Valerie Hillings and a foreword by Philipp Demandt has been published. An interactive Digitorial®, elaborately designed to provide comprehensive insights into the exhibition, is available at vasarely.staedelmuseum.de/en.

An exhibition organised by the Städel Museum, Frankfurt am Main in collaboration with the Centre Pompidou, Paris