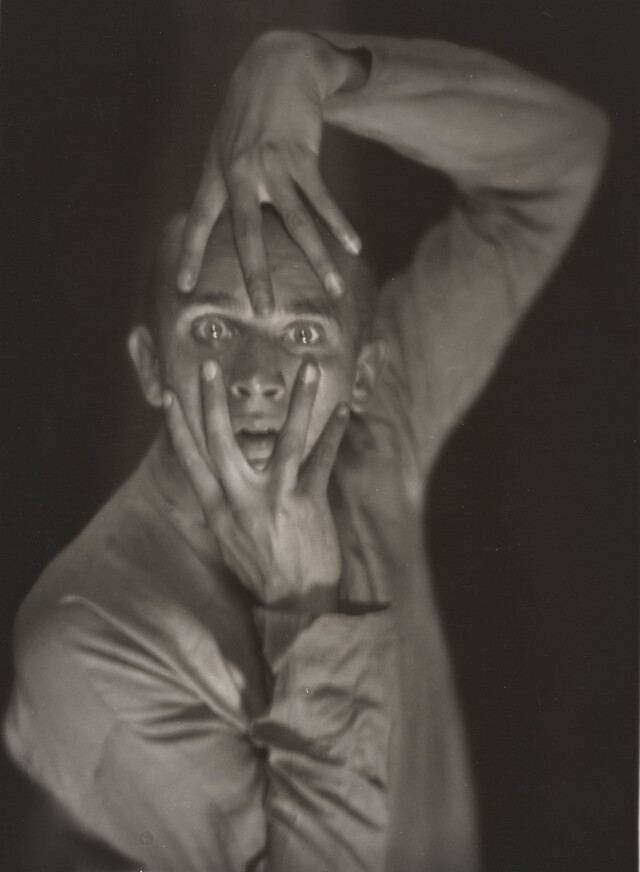 The Weimar Republic (1918–1933) was an era of great innovation in modern photography. There was a growing demand for press and advertising images—and numerous photographers to cater to it. Their works also appeared in elaborate photo books they published on their own initiative. One catalyst for these developments was the advent of the 35mm camera in the 1920s, an invention permitting unprecedented freedom of movement. Unusual perspectives, steep-angled views from above and below, and close-ups of details testify to a new enthusiasm for photographic experimentation. This modern aesthetic came to be known as “Neues Sehen” (New Ways of Seeing), a catchword that can be understood as a call for a new visual approach on the part of the photographer and the viewer alike. Pictorial language now became clearer, more direct, and in many cases more linear. In its matter-of-fact rigour it corresponded to the needs of a society that, after the disaster of World War I, had come to favour realistic depiction.

From June 30 to October 24, 2021, the Städel Museum will shed light on modern photography’s wide-ranging trends. In an introduction and seven theme-oriented sections, the exhibition New Ways of Seeing: The Photography of the 1920s and ’30s will convey an impression of the medium’s various uses in the interwar period. Some of the works on view will also offer visual presentiments of the 1930s, in which the Nazis increasingly instrumentalized photography as a means of communication for political propaganda purposes. The show’s themes will encompass photography’s establishment at vocational training institutes and art academies, photographic illustration and photojournalism, the employment of photography in science and research, portrait photography, and the use of the medium in advertising, industry, and political propaganda. Historical magazines, photo books, and posters will supplement the works on view.

“Present-day photography exhibitions rarely show the works in the context in which they were made. Instead the focus is on the images as artworks in their own right, and on the aesthetic appreciation of the original print. Most photos, however, were taken for a specific purpose—for newspapers, posters, magazines, or advertisements—or assigned a purpose after the fact. The exhibition will shed light on photography’s original contexts and utilizations,” commented Kristina Lemke, the head of the Städel’s photography collection and curator of the exhibition.

The featured works, numbering over a hundred, will include examples by prominent exponents of the medium such as Alfred Ehrhardt, Hans Finsler, Lotte Jacobi, Felix H. Man, Albert Renger-Patzsch, Erich Salomon, August Sander, Umbo, Paul Wolff, and Yva, as well as several of their little-known colleagues, among them Carl Albiker, Karl Theodor Gremmler, and Paul W. John. Apart from a small number of loans, these works all belong to the Städel Museum’s holdings.

The exhibition New Ways of Seeing: The Photography of the 1920s and ’30s is the first exhibition curated by Kristina Lemke as newly appointed head of the photography collection at the Städel Museum. This position and its announcement marks the establishment of a new position at the museum in Frankfurt, one that will oversee the research and presentation of the photographic holdings, which currently comprise over 5,000 images.