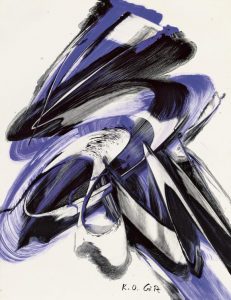 “Great realism, great abstraction” – the Städel Museum’s holdings of twentieth-century German drawings, which comprises roughly 1,800 individual works within the Department of Prints and Drawings, oscillates between these two poles. A selection of roughly one hundred drawings will be presented in a concentrated exhibition, impressively reflecting the quality of the collection and its historically evolved focal points.

The drawing takes on a special role in the twentieth century. It has always been a medium of searching, inventing and experimenting. In the modern age, it also gained independence and autonomy and became – especially in times of state surveillance and oppression – a medium of free thought. In its diversity, it also reflects the complexity of the rapidly changing culture and society of the twentieth century.

The roughly one hundred works on view from the twentieth century, supplemented by two paintings, are examined on the basis of various aspects, such as how the artists dealt with reality, how they questioned, further developed or undermined traditional pictorial ideas conveyed at the academies, and last but not least the fundamental significance of drawing within their respective oeuvres. The pencil sketches, brilliantly colourful pastels and aquarelles, and the monumental collages exhibited here also reveal the technical diversity of the medium of drawing, the specific characteristics of which the artists exploited, each in their own way. The drawings are loosely assigned to chronological groups which shed light in different ways on the relationship between closeness to the subject and abstract detachment from the model of nature.

The exhibition opens with masterful drawings by Max Beckmann (1884–1950) and Ernst Ludwig Kirchner (1880–1938), which also provide comprehensive insight into the draughtsmanship of the two artists. This is followed by works by members of the artist group “Die Brücke”, including Erich Heckel (1883–1970), Karl Schmidt-Rottluff (1884–1976) and Emil Nolde (1867–1956). Following on from Expressionism and its abstracting tendencies, drawings by Rolf Nesch (1893–1975), Werner Gilles (1894–1961) and Ernst Wilhelm Nay (1902–1968) are presented, as are watercolours by Paul Klee (1879–1940), whose works oscillate between a closeness to the subject and abstraction. Also in divided Germany during the post-war period, this preoccupation with the representational and the non-representational was characteristic for many artists. This can be seen in works of the Art Informel movement, as well as in neo-expressionist tendencies and Pop Art, as exemplified by the works of Karl Otto Götz (1914–2017), Joseph Beuys (1921–1986), Gerhard Richter (1932), Georg Baselitz (1938), A. R. Penck (1939–2017), Sigmar Polke (1941–2010) and Anselm Kiefer (*1945). The exhibition brings together works by a total of roughly forty artists.

The scientific research of twentieth-century German drawings has been made possible by the Gabriele Busch-Hauck Foundation, Frankfurt am Main.