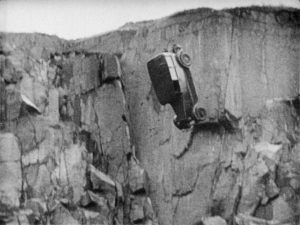 The Speed Art Museum is proud to present BRUCE CONNER: FOREVER AND EVER, an exhibition of films and prints by Bruce Conner (1933–2008), an artist known for his innovations in film, assemblage, drawing, painting, photography, printmaking, and collage. This exhibition was organized to celebrate a recent gift from the Conner Family Trust of twenty-one lithographs to the Speed Art Museum. These prints reveal an intricate and obsessive practice that crossed over into Conner’s drawings and films from the same period.

To highlight this remarkable gift and Conner’s role as one of America’s preeminent multidisciplinary artists, this collection of lithographs will be displayed with two recent digital restorations of Conner’s films THREE SCREEN RAY and A MOVIE.

Conner’s first film, A MOVIE, (1958) is a masterpiece of found footage films.  A trickster who upended Hollywood film’s conventions, Conner combines countdown leaders, flash frames, and the inevitable soaring music of title sequences to create a film that is forever about to start, but refuses to do so.  On view at the Speed as a new 4k digital restoration, this twelve-minute film is a landmark of American experimental cinema.

THREE SCREEN RAY, (1961/2006) is an exuberant expanded cinema version of Conner’s COSMIC RAY, 1961 and EVE-RAY-FOREVER, 1965, both re-edited into three side-by-side video projections. For COSMIC RAY, Conner combined images he shot of streaming street-lights and a strip-tease dance with found elements, such as countdown numbers, flash-frames, and head-and-tail indicators, to produce a rhythmic and energetic film. Conner, who had previously experimented with a multi-channel presentation of this material in 1965, began a painstaking restoration process with his longtime editor, Michelle Silva, in 2005.  Conner and Silva digitally remixed existing footage into three synchronized video projections. Set to the catchy melody of Ray Charles’s 1959 hit song “What’d I Say,” the resulting three-screen film resembles a video slot machine come to life.

The lithographs presented in this exhibition are derived from drawings Conner created with felt-tip pens, which were a new technology in the 1960s. The pens allowed Conner to draw single lines for hours without requiring that he take pen off the paper to return to an inkwell. The result was pages of tight, intricate patterned fields that churn with shifting tonal motion. Some of these prints invoke book pages or folios, while others include shapes and designs based on Hindu or Buddhist mandalas.

The exhibition will also include the display of Conner’s volumes of etchings entitled DENNIS HOPPER ONE MAN SHOW, 1971-1973. In the late 1950s Conner created a series of collages using fragments from nineteenth-century engraved illustrations. Fashioned in the style of the surrealist artist, Max Ernst, these collages capture a surreal, hallucinatory universe populated by images of flora and fauna, machine parts, and disembodied figures. Challenging the traditional notion of authorship, Conner attributed these collages to his friend and fellow Kansas native, the actor Dennis Hopper. In 1967 Conner proposed exhibiting these collages at a Los Angeles art gallery under the attribution of Dennis Hopper. Conner’s proposal was rejected by the gallery owner. Conner’s vision was not realized until the early 1970s, when he translated these collages into photo-etchings, published by Crown Point Press in Oakland, California.

About the Artist
Bruce Conner was born in McPherson, Kansas in 1938. He moved to San Francisco in the late 1950s where he was embraced by the city’s Beat community. His work has been featured in many exhibitions and film presentations, including 2000 BC: THE BRUCE CONNER STORY PART II, a touring retrospective organized by the Walker Art Center in 1999, and the recent BRUCE CONNER: IT’S ALL TRUE touring solo exhibition, organized by Museum of Modern Art, New York and the San Francisco Museum of Modern Art in 2016.