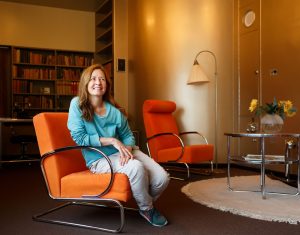 The French artist Dominique Gonzalez-Foerster has created a work especially for Sonneveld House: Opera-house is a domestic opera based on the Sonneveld family’s arrival in their new home. Using several soundtracks and objects, Gonzalez-Foerster transforms the static environment of the museum house into a theatrical space for active exploration.

Opera-house is based on early 20th-century operatic music and technology, but also on the experience of moving from a traditional to a modern environment. The family—Albertus Sonneveld, a director of the Van Nelle Factory in Rotterdam, his wife Gésine Sonneveld-Bos and their daughters Puck and Gé—had previously lived in a stately 19th-century townhouse. Although atmospheric, it was dark, with old-fashioned furnishings. When they moved, they left almost everything behind in the old house. Every element in the new house was chosen in consultation with the architects. The only items the family brought with them were books, clothing and some personal belongings, all carried in a single suitcase.

The studio on the ground floor was designed for the two daughters. The sisters used the studio for reading, studying and listening to music. It has a multifunctional sofa with an embedded sound system. The radio is connected to other rooms in the house, each of which has a speaker, enabling the family to listen to the music selected in the studio all over the house. Gonzalez-Forester uses the original loudspeakers to play soundtracks that can be heard throughout the villa, creating an in-house “opera.”

Gonzalez-Foerster created Opera-House especially for Sonneveld House, but the piece can be seen in the context of her recent work, such as M.2062, a prospective and fragmented opera, taking place as a series of performances all over the world. It also relates to her collaborative work with Ari Benjamin Meyers, such as T.451, a performative work inspired by Fahrenheit 451 (made into a film by Truffaut in 1966), taking place in several spaces and environments.

Living between Paris and Rio de Janeiro, Dominique Gonzalez-Foerster (1965) explores the relationship between fiction and reality, using film, performance, installation and photos. Taking inspiration from literature, the cinema and music, her work explores the borders between audience and stage, private and public, past and present. Her work has been exhibited at leading institutions and events including the Centre Pompidou, Tate Modern, Manifesta 10 and the Guggenheim Museum.