Skulpturenpark Waldfrieden: Klaus Rinke ‘On Time And Having No More Time’ 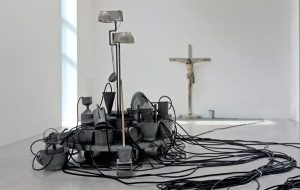 My entire work consists of retrospective conclusions which have been drawn where the past becomes the future rushing forwards.’

Klaus Rinke is a universal artist who cannot be considered from a one-dimensional standpoint. Rinke is a draughtsman, painter, sculptor, photographer, philosopher and an artist of aqueous mediums and landscapes, of the human body, action painter, an artist of words, concepts and philosophy. He has developed art for buildings and lectured thirty years at the Academy of Arts in Düsseldorf.
His immense body of work spans the cosmic as well as the earthly, the psychological and the physical, the symbolic as well as the real, the conceptual and performance. Klaus Rinke has never repudiated his local ties to the Ruhr region: The Normalzeit clock of the railway station Gelsenkirchen-Wattenscheid pervades his work as a central theme.
His exploration of the archaic forces of the earth’s interior and those of water are a direct result of the region’s close association with mining. Mankind is confronted with these forces which he perceives, investigates and measures because it is his duty to understand them.  The search and the capacity for this realization owe much to the artist’s deep religious convictions. This has led to an almost Faustian struggle as to from where we come and where we going, the interrelationships between time and space in which mankind is bound just as much as the elements which he is subject to and lives from. […]