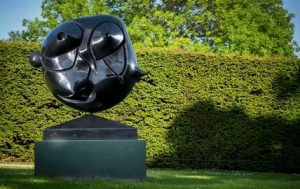 Joan Miró (1893-1983) is one of the artists responsible for establishing Classical Modernism. After studying art in Barcelona his initial creative work is of a representational nature, but as of the 20th century it increasingly looks into the artistic trends arising from France which were conquering the world. Relocating to Paris his work still initially displays influences stemming from Les Fauves and Cubism before becoming associated with Surrealism. As a painter and a sculptor Miró created an important oeuvre ranking with works by Pablo Picasso, Henri Matisse and George Braque. Just as other reputable artists of his period he was not only active as a painter and graphic artist but with increasing age as a ceramist as well. In addition his sculptural work accounts for a significant and considerable part of his oeuvre.