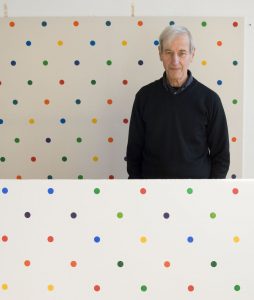 For James Rogers, the point in its perfection and simplicity is the ideal form and basis of a series of works that he began in the late sixties. Since then, the British painter, who has lived and worked in Wuppertal for several years, has devoted himself to Minimal Art and has remained true to its principles to this day.
Rogers sorts his point pictures methodically. The stringent conceptual grid leads to fascinating results, the images shine and shine, they convey calm and dynamism at the same time. In Skulpturenpark Waldfrieden, he is designing a wall of the second exhibition hall as a temporary work of art that will be on display from July 19 to October 7, 2018.
An essential basic element of whole picture series since 1968 is the point. The pure geometric form, which lacks corners and right angles, is set evenly on the white canvas and follows a recognizable order whose logic is not immediately apparent to the viewer. All circles, basically painted in the primary colours. Same size and exactly the same diameter. James Rogers has methodically sorted the coloured dots. He determines the extent and distance between the forms and follows a mathematical system. All-over and fictitiously beyond the borders of the canvas, the coloured dots on the white background are not spontaneously and randomly distributed. They are oriented on a diagonally and horizontally aligned, uniform image architecture. Visible painting gestures are deliberately avoided, brush marks are not visible.
The stringent conceptual grid leads to fascinating results. The point pictures shine and glow, they convey calm and dynamism at the same time, they touch through their lyricism and musicality, which reminds of the minimalist sound of a John Cage.