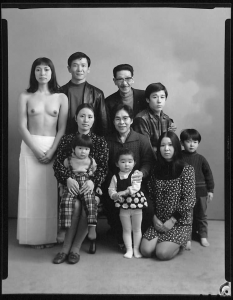 This exhibition illustrates the development of Japanese nude photography from the 19th century to the present. The works of over 30 top photographers, including Araki Nobuyoshi, Moriyama Daido, Hosoe Eikoh, Izu Kenro and Honjo Koro reveal their artistic vision of nudity. Foreign influence and changing perceptions in Japanese society on gender, nudity and sexuality are on display in over 120 photographs.

By the early 20th century photography was no longer seen as only a copy of the world but had also developed as an art form. Photographs were given a soft focus and were transformed giving them a dramatic character such as those of Unto Nakayama (act. 20th century).

The 1930s saw widespread experimentation in the field of photography including the introduction of various techniques and trends. Amongst trends was ‘New Photography’ which was based on a movement known as ‘New Objectivity’. The naked female body began to be seen as an aesthetic object. At the same time, a counter movement known as photorealism emerged in which photographs were seen to reflect and record Japanese traditions such as those in the works of Iwase Yoshiyuki (1904 – 2001). Iwase’s ‘Pearl Divers’ is a famous example of this movement.

Subsequently, movements such as social realism, subjective and experimental photography arose. In the latter genre artistic boundaries were sought and exceeded. Good examples can be found in the intuitive, grainy and blurred photographs of Moriyama Daido (1938 – ) and the surrealistic and abstract works by Honjo Koro (1907-1995).

Photographs by younger generations illustrate new trends, but also the influence and recognition of the works of previous generations. Gondaira Taichi (1956-) for example used his camera to document the classical beauty of the female body to pay homage to the fading traditional Japanese values and way of life.