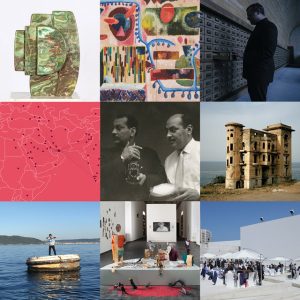 Latif Al Ani (b. 1932, Baghdad, Iraq) was one of the earliest to capture cosmopolitan life in Iraq from the 1950s through the 1970s. His black and white photographs represent a unique visual record of the country’s complex culture, politics and industry during a period in which everyday life was increasingly influenced by urbanisation. Spanning these pivotal three decades of Al Ani’s photography, this solo exhibition will explore both the development of his practice and a period in the history of Iraq as captured through his lens.

Anna Boghiguian’s (b. 1946, Cairo, Egypt) work reflects the itinerant life she has led across the globe, travelling to various countries including Egypt, Canada, France, India and Italy. A consummate chronicler of modern metropolitan life, her dense compositions combine diverse materials, including wax, wood, paint, cut-outs and collage. As the artist’s first major retrospective to date, the exhibition spans over four decades of Boghiguian’s practice.

The exhibition was originally on view this Autumn at Castello di Rivoli Museo d’Arte Contemporanea, where it was curated by Carolyn Christov-Bakargiev and Marianna Vecellio. The Sharjah presentation of this travelling exhibition is co-curated by Hoor Al Qasimi and Carolyn Christov-Bakargiev, and is organised by Castello di Rivoli Museo d’Arte Contemporanea, Rivoli-Torino in conjunction with Sharjah Art Foundation.

Mohammed Ahmed Ibrahim (b. 1962, Khor Fakkan, UAE) is best known for his explorations into land art, inspired by his life-long relationship with the environment of Khorfakkan. His work often utilises organic material or form and explores an interest in the relationship between nature and urban development. The exhibition traces the development of Ibrahim’s practice and its enduring influence on contemporary art in the UAE.

Zineb Sedira (b.1963, Paris, France) is recognised internationally for her explorations of family, tradition, oral history, migration and the intergenerational transmission of knowledge. Although these concerns have recently come to wider public attention, they have long been the focus of Sedira’s work in video, photography, sculpture and installation. Alongside her best-known works, three new commissions will engage geo-political histories of the recent past.