Sharjah Art Foundation: Ala Younis “Steps toward the impossible” 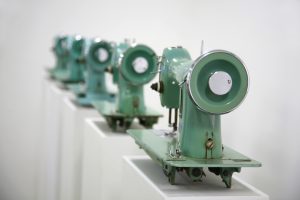 Best known for her projects informed by extensive research, Ala Younis has explored the formation of the modern Arab world and the potential for renewed thought and action that the era continues to inspire. She examines major issues of the modern day—nationalism, religion, social movements, the emergence of global capital and personal and collective loss—through a multiplicity of voices. She moves through history by studying traces of everyday objects, recurring images and routine practices. Rather than focusing on the perspectives of a singular leader or a spectacular event, Younis offers an in-depth understanding of an era that at times resembles our own.

Ala Younis: Steps Toward the Impossible continues Sharjah Art Foundation’s commitment to organising exhibitions by important contemporary artists. Providing insight into the expansive and exploratory method of study that has come to characterise Younis’ art practice, this show presents work by the artist from the past ten years, including Nefertiti (2008), which examines Gamal Abdel Nasser’s industrial project in Egypt through the story of a domestically produced sewing machine, and Tin Soldiers (2011), an installation that reflects on the inheritance of militarisation and emancipatory struggle through the production of toy figurines representative of the region’s standing armies. The exhibition also features Enactment (2017), a suite of drawings and prints that consider the region’s unlikely histories of performance art as embodied in gestures of political commitment. Finally, a new Sharjah Art Foundation commission adapts the language of architectural model making and early studio stagecraft to a study of the emergence of Arab daytime television drama and the interplay of nations, investors, studios, currency fluctuations and political crises that shifted centres of cultural and political influence.

As artist, researcher and curator, Ala Younis’ multifaceted practice has explored the formation of the modern Arab world and the potential for renewed thought and action the era continues to inspire.