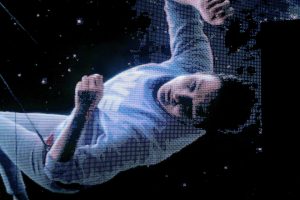 A première in Mänttä for Ahtila’s three-part artwork is a hybrid piece that combines sculpture with moving image. Afterwards, the artwork commissioned by the Serlachius Museums, embarks on a world tour.

Potentiality for Love (2018) deals with the potential for empathy and love towards other living beings. It turns attention to those human emotions that could serve as a foundation for dismantling the hierarchical structures between living things, thereby engendering a turn towards non-humans and the recognition of others. The work reflects the origins of these emotions, how we define them and how we conceive of their function as part of a larger continuum of living beings.

The first element of the installation is a hybrid work that combines sculpture with moving image technology to focus attention on the point where love is born. Using outdated LED modules, it recreates an image of a distant memory, of mother and the primal unity. It also touches upon the memory of loss and distance, the moment when the possibility for love that rests as potentiality, first emerges.The second element asks whether our love and empathy is reserved only for our own kind, or whether we are capable of holding them towards other living beings as well. This question is approached by addressing the historical divide between humans and non-humans. This is achieved by creating a situation that questions what it is to be a human being and how the other, the stranger, is constructed in our culture. The medium for this is a modified situation featuring a setup similar to that used to treat phantom limb aches. In these two works, however, the mirror is replaced by a thin LED monitor showing the arm of another primate.The third element of the installation approaches the theme by creating a sound landscape with dialogue.

Eija-Liisa Ahtila says that her new work differs from her earlier pieces so that the work isn’t a story that has a specific duration, but rather uses different elements from moving pictures and their characteristics, as tools to approach the motif. They range from things such as the creating of illusions, the ability of sounds to create emotions and the relationship of what is presented by moving pictures to experienced reality, and so on.

The previous pieces and the process of making them led me to the question I could not avoid: what is it that gives us human beings the potentiality to turn our attention to others, to respect and appreciate other ways of living and other living beings.