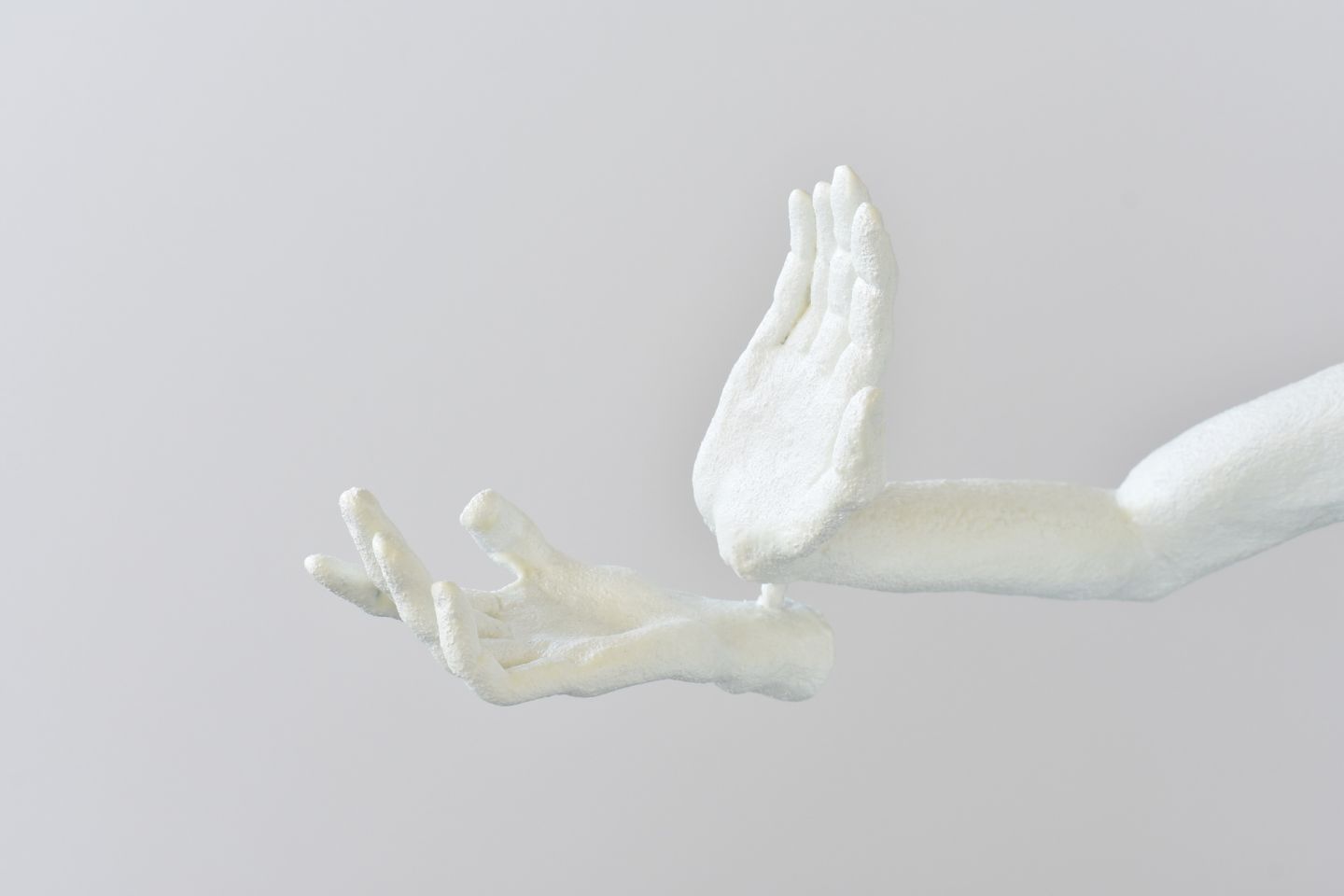 Imperfect List continues British-born, New York-based artist Jesse Wine’s open and intuitive approach to sculpture, building upon a fifteen-year engagement with clay as his primary artmaking material. The exhibition brings together a wide variety of works, ranging from larger-than-life, abstracted figures, to segmented, floor-bound works displaying fragments of dexterous limbs and living room furniture, to modernist buildings and a fleet of small trucks.

Installed across SculptureCenter’s disorienting lower level galleries, Wine’s exhibition stages an anxious relationship between rest and activity. In one work, an angular apartment tower sits on top of a giant, sleeping head. Nearby, two monumental, leggy sculptures casually convene as vehicles pass below. Throughout, limbs and objects that seem to be spent, submissive, or otherwise idle evoke a churning matrix of stifled aspirations: to move from one’s childhood home to the city, to couple up, to reconcile productive efforts with un(re)productive sexuality, to be on call should an opportunity at success arise. Pairings of works in the exhibition pull the viewer back and forth between domestic interiors and domineering public settings, dissolving the human form into and out of the spaces that condition it. Though Wine’s distinctive approach to free-formed ceramic produces suggestive postures and attenuated gestures (count the number of fingers and toes in the exhibition), the work often appears malleable, sometimes even making itself. Wine hides its structure under alluring surfaces coated with admixtures of paint, minerals, and metals that wryly hint at a longer, “timeless” history of sculpture.

In a subset of works that resemble or emulate buildings, Wine’s work thematically explores the excessive productive force that gives the city its shape. Together, the works reflect a fluid and anthropomorphic proximity to bombastic construction in the urban landscape, as well as its pragmatic formal deviations. In analogies made between limbs, joints, and architectural features, Wine produces allegories of individuals’ purchase on the space above, below, and around themselves. His works evoke what architect and artist Madelon Vriesendorp has described as the “sexual ecstasy of cities.” Vriesendorp cautions, however, that “Disaster follows ecstasy. Like form follows function.”

Imperfect List, the exhibition’s title, comes from a 1989-90 spoken-word track by Big Hard Excellent Fish, a short-lived project of British musicians Pete Wylie and Robin Guthrie. Over a downtempo beat, the voice of Liverpool musician and artist Josie Jones recites a public declaration of micro- and macro-affronts to personal dignity: “Heartbreaking, lying friend,” “acid rain,” “gut-wrenching disappointment,” and “the Tory invention of the non-working class,” among many others. In alignment with the song, Wine’s exhibition posits sculpture as a paradoxically over-productive yet ruminative activity where capitalistic desires are cyclically constructed, then run on empty and deformed — but not yet destroyed.