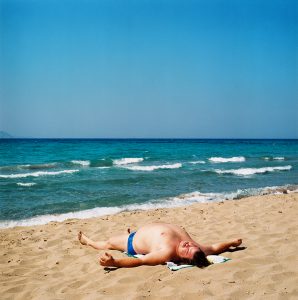 This year’s exhibition takes as its cue the symbolic location of the Art Space Pythagorion and particularly the view from the main window of the exhibition space onto the Mediterranean Sea. This sea, like all others, is not neutral though its calm waters – as seen from this ‘room with a view’ seems to suggest otherwise. Just 1.2 km away lies Turkey. In 2015 Samos was one of the islands that bore the brunt of the refugee crisis. These are the edges of Europe and the crossroads between three continents, which makes them highly contested in terms of geopolitics. This life-sustaining liquid expanse, and others beyond its basin, is at the cornerstone of environmental, social, economic and geo-political shifts and key questions of today, which transcend its geographic limitations. From borders, national sovereignty, competing economic interests and extractionism, to migration, tourism and environmentalism, the exhibition will look into the politics of the sea and some of the major challenges affecting it. The depths of the sea are the last frontier within human reach, and as such are increasingly vulnerable to human exploitation. Starting by focusing on the local and the regional maritime politics, and expanding to the national and international, it will consider how human activity and human interests impact upon the delicate balance of our planet’s ecosystem, and their repercussions, with the island of Samos and the Mediterranean at the epicenter, but also beyond.