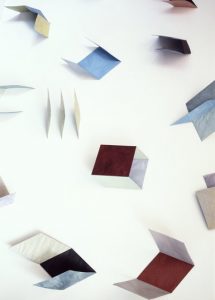 Erwin Heerich and Marianne Pohl “Between sculpture and architecture”

In the current collection of art. MOVES. 14 Brown, black and white cardboard sculptures of Erwin Heerich encounter colored wall installations made of folded paper by Marianne Pohl in an exciting dialogue.

Army ego (1922-2004) and Palmer (1930-2010) created both objects, which deal with architecture. Although they worked in formal language similar to minimalist army ego and paler followed very different approaches around questions about the design and the aesthetic shape of architectural fabric.

Marianne Pohl developed stationary installations, which they then realized with simple materials from basic geometric shapes. She almost always involved the respective showroom. The current collection is dedicated to three installations from the years 1985 to 1987, in which Pohl explored the relationship between architecture and spatial illusion.

Erwin Heerich stereometric space body folded and glued cardboard created already in the 1960s. Otherwise as at Pohl, army ego cardboard sculptures do not contact to the surrounding space. Their relation to the architecture lies in the application of architectural design methods and the Monumentality, which radiate the works only very small part. 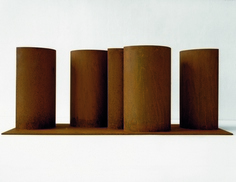 In 1957, Erich Reusch (born 1925) has developed innovative floor sculptures, which occur with the surrounding space in relationship and structure it. Years ago Carl Andre, Richard Serra, he solved the sculpture from its base, gave up their common alignment in the vertical. One of the first ever, Reusch developed sculptures and installations with moving and acoustic elements. Erich Reusch became a pioneering artist of international contemporary art. Especially famous are his “electrostatic objects”: works of art made of Plexiglas and black pigment particles, which react to the movements of the observer and the conditions.

The Reusch trained as an architect and sculptor, but working as a painter and printmaker 1975 as a professor was appointed for “Integration of art and architecture” at the Art Academy in Düsseldorf, where he taught for 25 years and a few years as the Deputy Head worked. Reusch has realized numerous sculptures in public space. in 1977, he participated with a large floor sculpture in documenta 6 in Kassel.

The exhibition in the Museum Schloss Moyland offers a cross-section of the work of Reusch. It was compiled as a spatial installation by the artist himself.