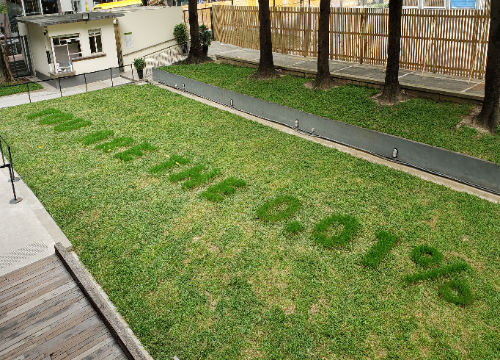 The installation “You are the 0.01%,” which premiered in Hong Kong in 2019, is based on the distressing research findings by scientists Yinon M. Bar-On, Rob Phillips, and Ron Milo: While humanity makes up just 0.01% of the earth’s biomass, it consumes 30% of the entire primary production of the biosphere.

The work is part of a series entitled “Living Slogans,” which the artist has been working on since 2016. It is closely connected to a famous 2011 essay by the U.S. American economist Joseph Stiglitz. In this essay, Stiglitz argued that the richest 1 percent of Americans owned 25 percent of the country’s wealth. To protest this, the globally renowned Occupy Wall Street movement formed in New York City under the motto “We are the 99%” and occupied Zuccotti Park in Manhattan’s Financial District for weeks.
In “You are the 0.01%,” Zheng Bo not only refers to the unequal distribution of wealth, which is even worse in his native Hong Kong than in the United States. He argues that human inequality is directly related to the inequality that exists between humans and other species. The artist wants to raise awareness about this state of affairs and encourages us to rethink the Occupy motto along ecological lines: “We are the 99%. We are the 0.01%. We, the 99%, need the 99.99%. We humans must collaborate with nature and its life forms.”

Zheng Bo’s artistic practice again and again focuses on the relationship between humans and nature. During his 2020 residency at the Gropius Bau in Berlin, the Chinese artist and theorist studied possibilities to promote species equality on our planet, looking at plants as political practitioners and allies.

The installation in the Schering Stiftung’s courtyard is presented in parallel with Zheng Bo’s solo exhibition “Wanwu Council 萬物社” at the Gropius Bau Berlin, thus making possible a comprehensive overview of the artist’s creative work in Berlin.