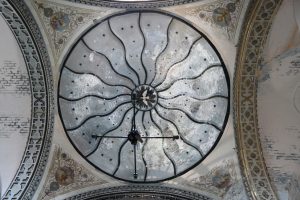 Four automated aerial drones make up the sound installation “TETRAKTYS,” which the Berlin-based artist Jens Brand developed specifically for the Project Space of the Schering Stiftung. “TETRAKTYS” refers to the Music of the Spheres, which is based on the ancient idea that the movement of celestial bodies generates sounds that produce a harmony.

The Pythagorean “harmony of the spheres” and resulting notions of the “musica mundana” (Boethius) and “harmonice mundi” (Johannes Kepler) once served as a universal model for explaining the order of the cosmos. The ideas of a world based on simple numerical proportions and of the unity of art and science continued to fascinate people until well into the modern era. “TETRAKTYS” plays with these interpretive contexts in subtle and ironic ways. Brand’s humming model of the spheres is generated with the aid of devices that are normally employed in entirely different contexts. The aerial drones, which form the corners of a virtual tetrahedron in space, function as sound generators of a mechanical model of the sky. Their simple chord structures, based on fifths, create changing sound surfaces that, as humming “spheres,” accompany the continually changing spatial constellations of the “celestial bodies.”

Jens Brand (born 1968 in Dortmund) studied fine arts at the Münster Academy of Fine Arts (1988–1994). Inspired by Phill Niblock and the artistic environment at Paul Panhuysen’s Het Apollohuis, he turned to experimental music and sound art. Since then, he has created a large number of installations, music performances, and cross-media works. In 1992, he began an intensive collaboration with Waldo Riedl and founded mex e. V., an initiative to promote cross-media and experimental music and media projects. Jens Brand has been awarded many fellowships and has received many commissions to create compositions. He was a fellow at Villa Aurora in Los Angeles in 2003 and taught at the Münster Academy of Fine Arts in 2004. Since 2013, he has been a professor at the Kunsthochschule Kassel. Jens Brand has lived and worked in Berlin since 2010.