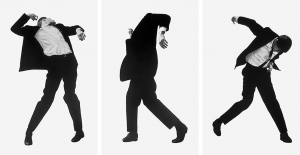 The black-and-white visual world of the American artist Robert Longo (b. 1953) challenges our conception of the Truth. It produces unexpected analogies between content and form. The main focus of the exhibition Robert Longo, presented by the Sara Hildén Art Museum, is on Longo’s large-scale charcoal drawings. He has said that he is an “image thief”, who exploits films, historically significant paintings, and the continuous stream of media pictures in his work, seeking to create a balance between the highly personal and the socially relevant.

Longo’s imagery has been described as all-American and masculine – at once epic, yet also threatening. He often presents subjects at their maximum potential energy: roses bursting into bloom, waves surging up in all their brutal force.

Longo tends to work on several drawings at the same time. The subjects of the pictures overlap with one another to create contrasts and comparisons. Longo captures the split second lasting forever. He examines the modern-day inundation of images, and slows them, asking the viewer to take time, to truly see what they are looking at and to understand what is going on around us. Slowness also takes on a concrete form in Longo’s process: the charcoal he uses is fragile, and the artistic process is laborious and time-consuming. The physical act of drawing requires Longo to consume and translate images on a molecular level, pointing to the uniquely intimate quality of the medium. This is connected with Longo’s view that art is believing: in order to be able to devote a considerable amount of time to something, one must believe in it in a fundamental way.

Longo creates his drawings in series based on various themes. This exhibition presents central and current themes in his oeuvre. One series presented here, The Essentials, represents Longo’s interpretation of the creation myth and the effect of images on the mind. The drawings of sleeping children as in Untitled (Perseus), 2008, also represent the birth of the world for the artist, while the uncontrolled forces of nature in Untitled (Hellion), 2011, are set in opposition to humanity. The Mysteries for their part deal with intuition and employ an iconography of emotive images. Parallels can be drawn as well between the caged tigers in Untitled (Cavaliere Bianco), 2014, and the women in burkas in the Nasreen series.

For Longo, art represents a way to understand the world around us and to question it. He describes the study of art history as being “the gunpowder in his bullets”. Longo seeks to make the invisible visible. In his series of drawings Hungry Ghosts, he explores the use of restoration X-rays of famous paintings and attempts to express the superficiality of the Truth.

In the 1960s, Longo was deeply influenced by anti-war and social movements. For him, art is a political act. Longo’s most recent series, The Destroyer Cycle, reflects the world that we live in today. He addresses present-day America, global political power relations, anti-racism demonstrations, terrorism and the entertainment industry. The series includes Untitled (Prisoners), Untitled (Football Players, Rams, Hands Up)and Untitled (Riot Cops), all produced in 2016. Connected with these drawings are the works depicting the American flag that Longo created first in the 1980s and the bronze sculpture All you Zombies: Truth Before God (1986/2012).

Longo studied sculpture at Buffalo State University. After graduating, he returned to New York, where he became a leading member of The Pictures Generation. His breakthrough work was a series of drawings Men in the Cities, which became one of the icons of 1980s post-modernist art. This exhibition in the Sara Hildén Art Museum is the first extensive presentation of the artist’s oeuvre in the Nordic countries and also one of the large museum exhibitions of his works.