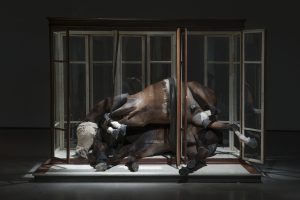 The sculptor Berlinde De Bruyckere (b. 1964) lives and works in Ghent in Belgium. Ghent lies in the Flanders region, which witnessed some of the fiercest battles of the First World War. De Bruyckere’s artistic breakthrough came with a work that was commissioned by the In Flanders Fields museum for an exhibition in 2000:

Dead horses, the innocent victims of war, became a metaphor that represented the feelings aroused by the war. In this, the centenary year of the Finnish Civil War, the exhibition offers an opportunity to confront human suffering and vulnerability.

De Bruyckere seeks to give form to something that the viewer can experience as healing and comforting; she wishes to create works that allow the viewer to cry in their presence. Wounds have a special meaning in her sculptures: they are never open, but rather bound or sewed up, wounds that have been tended.

The motif of the horse, which in the First World War memorial exhibition bore the burden of representing feelings of human loss and hostility, has over the years increasingly come to resemble a human being. The artist’s fascination with the horses is based on the fact that that it is part of history and at one and the same time belongs to the present day: it has not changed. And, like the horse, the human mind and emotions have remained unchanged throughout history. De Bruyckere reminds us of this in her works with references to history, and particularly the history of art.

This exhibition in the Sara Hildén Art Museum is De Bruyckere’s first solo exhibition in Finland. It occupies the whole museum area and comprises works mainly from the 21st century but some also from the late 1990s.