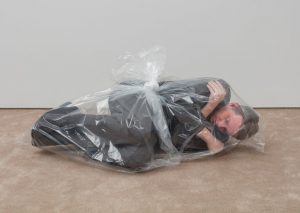 Fondazione Sandretto Re Rebaudengo presents Unemployment, the first solo exhibition in Italy of Josh Kline (USA 1979). Through sculpture, video and installation, Kline explores the political and social transformations of our age, presenting a critical look at the impact of technology and the “new economy” on the lives of individuals in the 21st century. The US society is taken as a negative paradigm of processes which are affecting all advanced countries, and which take the form of a growing threat to the privacy of individuals, their freedom of expression, and their economic status. In the best tradition of literary and film sci-fi, Kline shares his dire outlook on a world on the verge of collapse, in which the interests of a few people shape the lives and living conditions of the many.

Unemployment is the latest chapter in a cycle of exhibitions that speculate on nascent political, economic, and cultural issues that are likely to define the coming decades. Adopting a narrative approach, they develop several themes and move chronologically from the observation of the present to a prediction about the future. Kline’s previous project Freedom (2015-2016), the beginning of the cycle, centered on the possibility of political action, the potential of political speech, and the fate of democracy itself in societies where the social commons has been privatized. The installation was inspired by Zuccotti Park, made famous by the Occupy Wall Street movement in 2011. It showed threatening Teletubbies in police riot gear, equipped with monitors built into their abdomens, featuring videos in which the words and identities of political activists on social media were transposed onto retired policemen. Another central work, created using face-substitution software featured an uncanny version of President Obama delivering a fictional and uplifting inaugural speech in 2009 – presenting a vision of the transformative progressive presidency that might have been. In each successive exhibition in the cycle—of which Unemployment is the second—Kline will look at a possible moment in the future and the set of developing issues which are likely to define it’s politics.

Unemployment jumps forward to the 2030s, more than two decades after the 2008 financial crisis. Here Kline builds a hypothetical, disturbing future scenario, imagining the devastating effects of a new economic crisis, which strikes what remains of a middle class that has lost its jobs as a consequence of massive automation in productive activities and services. Unemployment will become an ever bigger issue, and will eventually affect professional and specialized jobs as well, leading to economic, social and personal upheaval. In Unemployment, Kline asks questions about what will happen to the hundreds of millions of middle-class professionals in the West, in a world where they may never work again. Stuck in poverty, discarded by a system that no longer needs the help of humans in order to function, individuals could end up like waste to be disposed of, nothing but abandoned, empty shells devoid of any use value. The works explore the fate of the human being and the human condition in this all-too-possible future. Kline’s narration takes the form of sculptures, audio and video works, and installation elements that help create an immersive, dreamlike experience, like a film in the fourth dimension which disturbs viewers for its verisimilitude and the recognizability of compositional elements, which are part of a shared imagination, of an everyday urban and media environment. Many of the works are created using advanced technology, including 3D printing and graphic software, as if he wanted to give a tangible example of, and a physical substance to, the automation processes that lead to the disastrous scenarios he prophesizes.