Sandretto Re Rebaudengo: ‘Today, Tomorrow and the Day after Tomorrow” 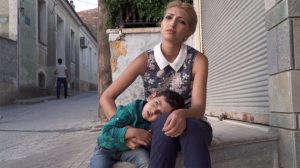 This project, that is dedicated to the dramatic situation of Middle Eastern refugees on the Greek islands on the border with Turkey, is composed of four works created on the island of Samos, the installation brings images into life inside and outside one of the hotspots where for years the Middle Eastern refugees lie in flight from Syria, Afghanistan, Iraq, Pakistan, Palestine, Kurdistan etc …, waiting to be transferred to the mainland and relocated to other permanent reception centers.

On the entrance wall to the hall is “Happy Summer”, a beach towel depicting the island of Samos, where the icon of the tent has been added to the tourist spots and the unmissable sightseeing. “Hotspot”, to remember how, in the same place where tens of thousands of tourists spend their holidays, has consumed for years a humanitarian drama of which we prefer to keep quiet.

Along the walls, “Memories of a camp” is set up, a series of 60 photographs of objects belonging to refugees, both intimate and private as well as the “memory” of the families of origin: “the most important thing I have”, each of these accompanied by the name, age and country of origin of the owner.

On a pedestal there is a small anonymous book entitled “Nameless”, with more than ninety images taken by refugees inside the camp and reproduced on full page, raw snapshots that tell the dull everyday life of the hotspot without a veil. endless wait in the hope of reaching the mainland, Europe.

At the center of the room is the video “Looking forward to seeing you” which, as in a dream, traces the journey of refugees: stowaways through the woods up to the arm of the sea that separates Turkey from Greece, a few but endless hundreds of meters of salt water, to then find themselves closed inside the camp, prisoners of a time that never seems to flow, while Europe, a mirage for a new life, moves away like an insurmountable mountain.

Today, tomorrow and the day after tomorrow is a production curated by Filippo Maggia and Daniele Ferrero, with the collaboration of Teresa Serra, Andrea Luporini, Roberto Rabitti, Wissam Andraos, Chiara Corica and Giulia Dongilli. Thanks to Fondazione Fotografia Modena.