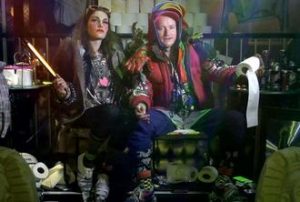 For the first chapter of The Institute of Things to Come – a temporary research centre on futurological scenarios proposing a series of four solo exhibitions and an educational program – the artist Bedwyr Williams presents Echt a film installation depicting a dystopian near future in which a fast-track feudal system has left Britain divided among new chieftains. His curious and fantastical film imagines a future in which an apocalyptic event, the Big Squabbles, has forced humanity to reform society, having disregarded previous rules. In this new world where social status is determined by consumption, compulsive accumulators are kings.  These accumulators of objects and junk have set up their new courts in former dance halls and nightclubs, populated by a host of Williams’ acutely observed characters. If we consider the current socio-political scenarios, the social system narrated by Williams seems rather imminent: a portrait of a warped society characterized by strong individualism where acts of violence towards vulnerable individuals are the norm, and where the power is accumulated in the hands a few rich people, whose status quo is based on an unbridled consumption. In fact, despite the absurd aesthetics of Echt, it is no coincidence that the term “echt” in German means “real.”

Artist Bedwyr Williams is interested in worst-case scenarios and their effect on people. His performances, films and installations often involve comic narratives about dystopian futures, in which serious concerns are undercut by moments of absurd humor or banal observations. Previous projects have seen Williams build an observatory in homage to amateur astrologers and assume a range of different personas, including a one-eyed preacher, the Grim Reaper and a character known as “Count Pollen.” His work was shown at the Barbican Curve Gallery (London), The Whitworth (Manchester), Tramway (Glasgow), IKON (Birmingham) and Salzburger Kunstverein, among others. Williams represented the Welsh Pavilion for the 55th Venice Biennale in 2013 and recently won the Derek Williams Trust Purchase Award at Artes Mundi 7, 2017.