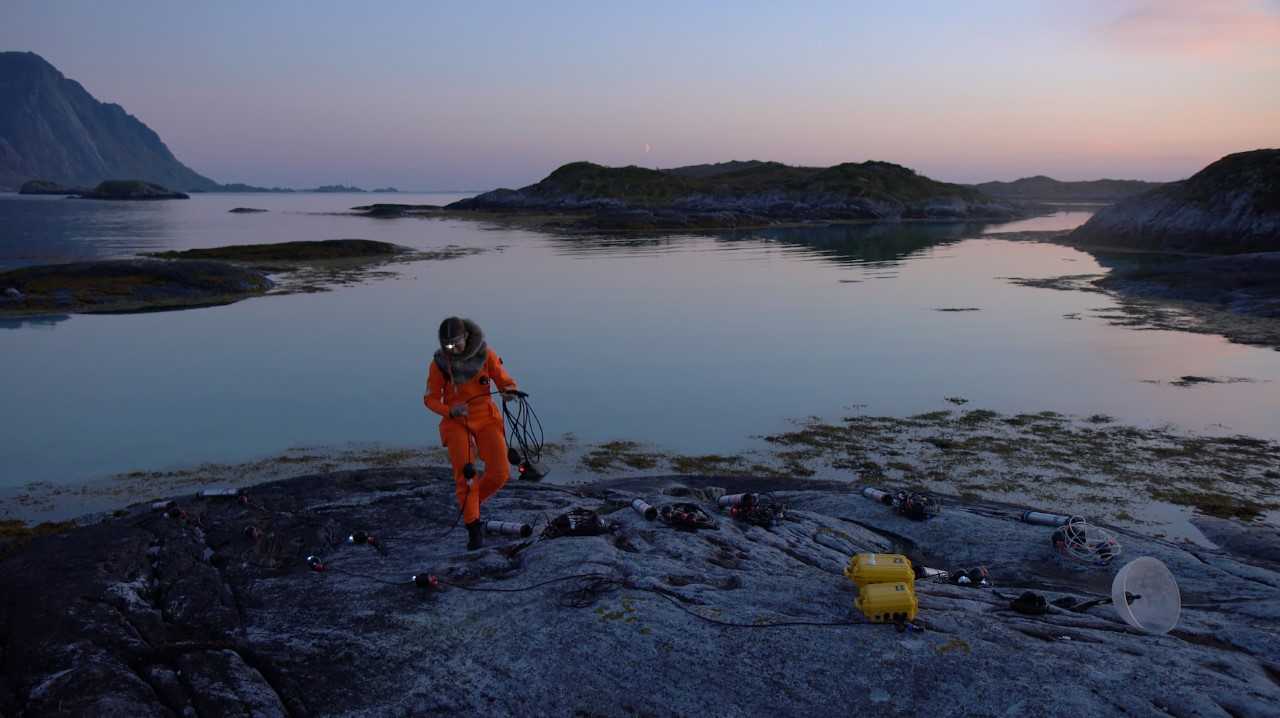 In parallel with its Breathing Water, Drinking Air exhibition, the Philara Collection presents Acoustic Ocean (2018), an installation by Swiss artist Ursula Biemann (b. 1955, Zurich, lives and works in Zurich)., Connected to and extending the collection display, this installation offers a different perspective on the theme of water,
raising several questions – What can we add to the narratives on water in regard to processrelated change, and to our bodily perception?
How can we make the ways our planetary ecosystem communicates audible? The video installation Acoustic Ocean focuses our attention on what else resonates with and within water: new forms of life, fictional interrelations and developments in the planetary ecosystem. In Acoustic Ocean, a female scientist on the Lofoten Islands in northern Norway investigates the acoustic ecology of the ocean.
She is simultaneously marine biologist, indigenous Sámi woman, diver, DJ, and marine acoustician. In her orange suit, she herself already seems to be a techno-organic compound. Equipped with hydrophones, parabolic microphones and other instruments, through these sensors she links her body to the sonic environment of the vast underwater multiplicity. She lays out her microphones like tentacles, responding intently to new messages through these organs. The seabed is a vital communication space for myriads of deep-sea
creatures. The poor visibility in the ocean depths means that the sonic dimension is the primary means of communication, navigation and survival in this tenebrous liquid universe of which we know so little.
Acoustic Ocean points to the possibility of a greater connectedness between living beings of our ecosystem as well as between different forms of intellectual and bodily knowledge. Biemann draws our attention to different levels and developments in narratives associated with water, as well as its environmental state and its condition as a habitat for the life forms within it.

These include analyses of military strategies, research, fictional narratives – science fiction in particular – and climate activism, all of which are linked to the ocean. Acoustic Ocean is part of a series of extensive video essays on new forms of life, fictive connections, and changes in the planetary ecosystem. Ursula Biemann’s artistic practice is strongly research-oriented and based on fieldwork – from Greenland to Amazonia – in which she investigates the consequences of climate change and the ecologies of forests, oil, ice and water. Thus, for example, she developed Deep Weather (2013), Forest Law (2014) and Subatlantic (2015).

Ursula Biemann studied at the School of the Museum of Fine Arts, Boston, the Instituto de Bellas Artes, San Miguel de Allende, Mexico, the School of Visual Arts, New York, and on the postgraduate Whitney Independent Study Program, New York. Since 1988 she has worked in cooperation with committed researchers. In 2011, she co-founded the art and media project World of Matter, which has been archived by the House of Electronic Arts in Basel since 2019.

Ursula Biemann has held curatorial and teaching positions at the Shedhalle Zurich, the School of Art and Design (HEAD), Geneva, and the Institute for Critical Theory at Zurich University of the Arts (among others). In 2008, she was awarded an honorary doctorate in humanities by Umeå University, Sweden. She is playing a key role in founding the Universidad Biocultural Indígena Panamazónica – UNBIP, the first indigenous university in the southern Colombian Amazon region. Her texts are regularly featured in art magazines and feminist publications.

Ursula Biemann has been awarded several prizes for her artistic work, including the Prix Meret Oppenheim (2009) and the Prix Thun for Art and Ethics (2018). Her works have been shown internationally in solo exhibitions at the Kunstmuseum Basel (2020), the UC Santa Cruz Institute of the Arts and Sciences, California
(2018), the Anthology Film Archives, New York (2018), and Neuer Berliner Kunstverein (2013), among others. In addition, her works have been shown in international group exhibitions, biennials, and festivals, including the Istanbul Biennial (2022), the Jeju Biennale, South Korea (2022), the Taipei Biennial, Taiwan (2019), the House of Electronic Arts, Basel (2018) and the Centre Pompidou-Metz (2016).