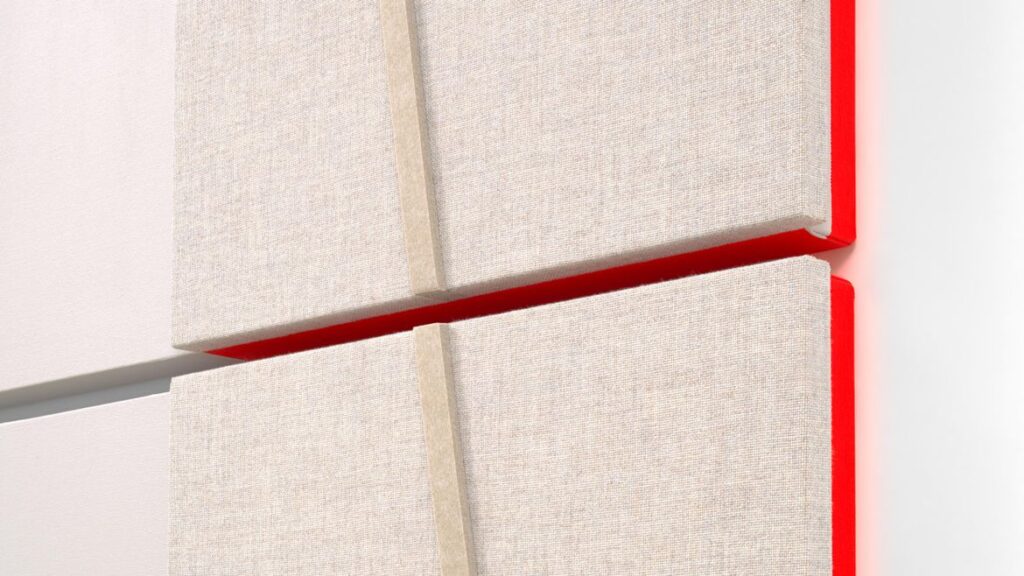 Jennie C. Jones: Dynamics addresses the objecthood of painting, sound as ephemeral content, and the graphic forms of music notation. Jennie C. Jones (b. 1968, Cincinnati) considers listening to be a conceptual practice that underwrites her visual art. For her solo presentation at the Guggenheim, Jones has produced a new body of work that responds to the museum’s iconic architecture by interweaving visual and aural experience.

Classifiable as neither paintings nor sculptures, many of the works in the exhibition feature architectural felt and acoustic panels to create what Jones calls “active surfaces.” By absorbing sound, these materials affect the acoustic properties of their environments and invite participation in an embodied mode of perception. Protruding from the wall, the panels are both a part of and apart from the architectural spaces they transform.

The pieces in the show comprise multiple components and take the form of diptychs and triptychs—arrangements that Jones compares to chords in music. The surfaces of these objects balance a contained minimalist rigor with gestural painted marks. This interplay between traces of the artist’s hand and signs of its erasure evokes the tension between improvisation and controlled structure evident in avant-garde music. Jones channels in her hybrid objects a legacy of radical Black sonic practitioners who negotiated twentieth-century social experience with works that could be powerfully expressive in their embrace of opacity.

Far more than “viewers,” visitors to the museum are encouraged to experience the social and physical dynamics of perception as they explore Jones’s works on the first two levels of the Guggenheim rotunda, as well as a sound installation on the sixth level.