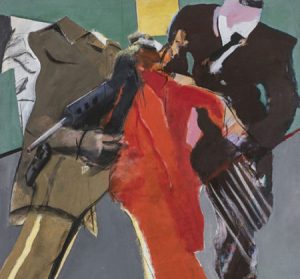 Albert Adams’ remarkable, monumental triptychs, South Africa 1959, dubbed his Guernica, along with South Africa 1958-59 (Deposition) featuring his black Christ are central to this exhibition. Adams remains an important voice in South Africa, while being relevant for all humanity – across borders and beyond his lifetime. The works selected from public and private collections, span his artistic career and highlight his contributions as an exceptional artist and humanist.

Born in Johannesburg, Adams (1929-2006) moved to Cape Town with his mother as a young child. After matriculating from Livingstone High School he applied to the Michaelis School of Fine Art, but was refused entrance because of the colour of his skin; he went to work as a window dresser and qualified as a teacher at Hewat College. Grants from the Cape Tercentenary Foundation enabled him to study at the Slade School of Fine Art in London and thereafter a scholarship took him to the University of Munich and master classes with Oskar Kokoschka in Salzburg.  Adams returned to Cape Town and exhibited to critical acclaim, but in 1960 he settled in London.

Considering his experiences as a mixed-race youth in apartheid South Africa, it is not surprising that his self-portraits, one of the recurring themes in his work, display an agitated urgency and multi-levelled self-reflection. His challenging and psychological critique of the evil perpetrated in the world is projected through his early Ape series, which is picked up again in 2001. Much of his work is concerned with the human condition and the fear, power and control that we inflict upon one another. In his Prisoner andCelebration series we see his unbridled approach to the trauma of disillusionment and marginalisation. Adams was a modernist and expressionist, but remained spiritually and politically contemporary.