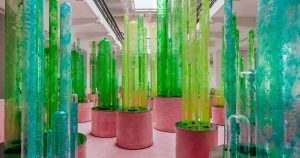 Lin Tianmiao creates environments that probe the intersecting and reciprocal relationships between the mind, body and the outside world. She sets up situations where viewers encounter their own being through observation and participation, showing how humans use external things to make and confer meaning about the self and the world we live in. In this way, her art is about systems, defined as a set of connected things or parts forming a complex whole. Lin’s laborious works take a range of forms: video installations, mechanically-moving structures that pump bright liquids through glass tubes and cocoon-like pods with bio-feedback sensors. However varied, they are unified by her conceptual approach to examine, expose and reimagine the workings of consciousness and identity, including gender, to challenge cognitive, social and ideological norms. Lin’s art of systems function on a physical as well as allegorical, often poetic, level.

The artist has conceived this exhibition as a system as well. She invites visitors to approach the entire show as a site-specific installation and journey, with each of the Rockbund Art Museum’s gallery floors presenting works that offer one stage or aspect of a total psychological and sensorial experience. The sections, moving from the second floor up, are Individual Consciousness, Collective Consciousness, Public Consciousness and Ultimate Consciousness. As her dense sketchbooks on the sixth floor attest, Lin draws from modern and ancient writings on science, technology, philosophy, neuroscience and psychology. For the room-sized installation My Garden (2018), a work specially commissioned for this exhibition, Lin’s research encompasses horticulture, linguistics, and a world history of gardens as spiritual geometries and medicinal evolution.

Lin Tianmiao was born in 1961 in Taiyuan and studied fine arts at the Capital Normal University, Beijing, emerging as a textile designer in the 1980s. Since 1986, she has lived and worked between New York and Beijing, and along with her husband Wang Gongxin, earned international recognition for her early experiments in video art installation. Lin’s fabric sculptures and video works in the 1990s and 2000s often centered on the female body, which she exposed as paradoxically voluptuous and neutered. This exhibition features two iconic works of this period, Day-Dreamer (1999) and High!!! (1999), which use stark, androgynous images of the artist’s naked body or shaven head. These images are seen via projected light and refracted through thousands of taut pieces of thread connecting the screens to a parallel surface in the space. The effect is to dissolve and disable the familiar, deconstructing our objectification of the female form and by implication, any ideas that distort behaviors of equality.

Recently, Lin has collaborated with the Shanghai Museum of Glass to create mechanical sculptures using massive quantities of glass beakers and vials reminiscent of laboratory instruments. In these elaborate and extraordinary works, Lin sets up what she calls “psychological pressure” between human life, nature and machines. She invites interaction, even participation, to compel confrontation between external systems (the art work) and internal systems (the physical body and consciousness), leading to a momentary fusion of both, an experience the philosopher Andy Clark calls “the extended mind.” In different ways, each of Lin’s fantastic and fragile structures are test sites for intuiting an experience of being, a consciousness outside of political ideologies or social norms, but radically on Lin’s own terms.

“As an artist, I can only hope to share my inner and spiritual experiences with you.” –Lin Tianmiao