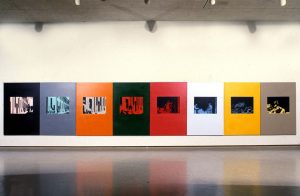 This solo exhibition is featuring rarely and never-before seen historic works of renowned Vancouver artist Ian Wallace. Highlighting Wallace’s perennial exploration of social issues, the works presented will also examine the crux of his artistic process: the intersectionality between public and private, personal and universal, process and production, abstraction and representation.
Included in the exhibition will be Poverty 1980 – 1984, a multimedia installation comprising of film, painting, and photography. Initially enacted in 1980 as a 16mm film commenting on the tradition of documentary film-making, the Poverty project offers variations on a single theme. By employing friends and colleagues to act out scenes of bohemian scarcity in East Vancouver, Wallace creates fictionalized simulacra—an aestheticized model of poverty derived from our collective, often over-embellished, social conscious. The film stills are then abstracted through repetition and presented amidst monochromatic colour fields, prompting viewers to review their own cognitive processes.

El Fronton (1990) is one of multiple on-site photographic interventions that expand the scope of Wallace’s inspection to a global forum. The angular photographs of a distressed Spanish public ball court are presented according to the tenets of modernist painting. Transmutation between photography and painting is juxtaposed against that between public and private, concocting a multilayered reflection on representation. Construction Site (The Barcelona Series I-V) (1991) and The Quarry, Serre di Rapolano I and II (1998) present modern cityscapes as sites of production. The Quarry’s wistful yet sublime ravines are offset with the budding concrete edifices of Construction Site. Together, these landscapes of incompleteness offer a meditation on industrialization, a critical observation on the new nature of our reality.

Presented for the first time in Vancouver since its inaugural exhibition, Wallace’s iconic institutional critique Idea of the University (1990) politicizes the universalizing values inherent to academia. A panorama of 16 larger than life panels with documentary colour photographs depict a variety of situations recalling campus life, each photograph decisively marked off with bright monochrome strips. The composition lies before us akin to a stage, yet we are denied a cohesive narrative. Instead, the pictorial space and time make up a utopian fallacy, awaiting disruption.

Ian Wallace, O.C. (b. 1943) lives and works in Vancouver. An influential figure in the establishment of photoconceptualism, Wallace has presented work in Hamburg Kunstverein; Kunsthalle Zurich; Witte de With, Rotterdam; American Fine Arts, New York; the Power Plant, Toronto; Canada House, London among many others. He is the 2004 recipient of the Governor General’s Award in Visual and Media Arts and was named an Officer of the Order of Canada in 2012.