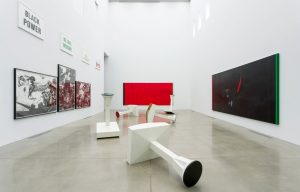 This survey of works by Kerry James Marshall spanning thirty-two years of the artist’s career is drawn entirely from Rennie Collection and features over 30 pieces from the artist’s complex body of work, which interrogates the sparse historical representation of African-Americans through painting, sculpture, drawing and other media.

The sculptural installation Untitled (Black Power Stamps)(1998), Marshall’s very first work acquired by Bob Rennie, aptly sets the tone of the exhibition. Five colossal stamps and their corresponding ink pads are dispersed over the floor of the museum’s four-story-high gallery space. Inscribed on each stamp, and reiterated on the walls, are phrases of power dating back to the Civil Rights Movement: ‘Black is Beautiful’, ‘Black Power’, ‘We Shall Overcome’, ‘By Any Means Necessary’, and ‘Burn Baby Burn’. The sentiment reverberates through three 18 feet (5.5 metre) wide paintings installed in the same room, titled Untitled (Red) (2011), Untitled (Green) and Untitled (Black) (2012). Exhibited together for the first time in North America, the imposing paintings with their colours saluting the Pan African flag echo the form of Barnett Newman’s Who’sAfraid of Red, Yellow and Blue III (1967).

Commanding attention in the centre of another room is Wake (2003-2005), a sculptural work that focuses on the collective trauma of slavery. Draped atop a blackened model sailboat is a web of medallions featuring portraits of descendants of the approximately twenty African slaves who first landed in Jamestown, Virginia in 1607. Atop a polished black base evoking the deep seas, the medallions cascade over and behind the mourning vessel in a gilded procession, cast out in the boat’s wake. The work commemorates an entire lineage of people whose lives have been irrevocably affected by the traumatic history of slavery in the United States, while simultaneously celebrating the resilience and vivacity of the culture that flourished from it.

Garden Party (2004-2013) is a long-coveted painting that Marshall re-worked over the course of almost ten years. Created in a style that harkens 19th century impressionist paintings, the work depicts a scene of leisure – an array of multi-ethnic friends and neighbours casually gathered in a backyard of a social housing project. Painted on a flat canvas tarp and hung barely off the floor, the image highlights an often-overlooked perspective of the vibrant everyday life in the projects and invites its viewers to join in the gathering.

In a dimmed room is Invisible Man (1986) – a historic work and one of the first to feature Marshall’s now iconic black on black tonal paintings. Referencing Ralph Ellison’s 1952 novel of the same title, Marshall’s work literalizes the premise of black invisibility. Only distinguishable by his bright-white eyes and teeth and the subtle warmth that delineates black body from a black background, Marshall’s figure, like Ellison’s protagonist, subverts his own invisibility, using colour as an emblem of power rather than one of submission. The work’s presentation at Rennie Museum provides an opportunity for viewers to explore the full mastery with which Kerry James Marshall layers his various shades of black.

Kerry James Marshall (b. 1955) is an artist, educator, and author. Maintaining an interdisciplinary approach to art-making, Marshall is perhaps best known for his prowess using classical techniques to re-integrate black figures into the history of painting. His extensive museum exhibitions include his much heralded 2016-2017 painting retrospective that opened at the Museum of Contemporary Art, Chicago, Metropolitan Museum of Art, New York and Museum of Contemporary Art, Los Angeles. Marshall is the recipient of 2015 Americans for the Arts National Award, 2014 Wolfgang Hahn Prize, 1997 MacArthur Foundation Grant, among other distinctions. He lives and works in Chicago.