Pyke Koch: A sphinx in the art of the 20th Century

An interview with Andreas Koch, co-founder of the Pyke Koch Foundation 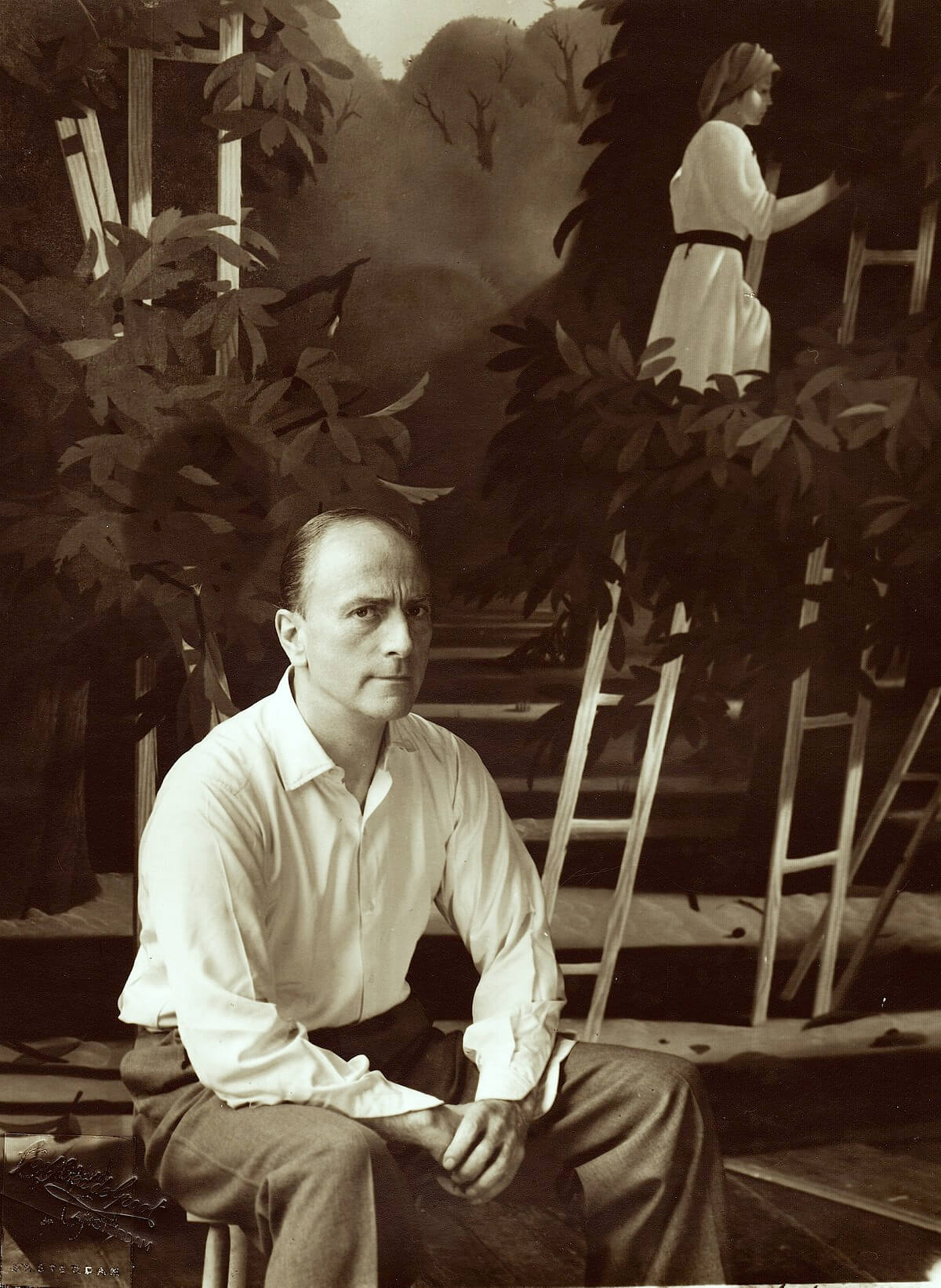 This autumn the Centraal Museum is holding a large exhibition dedicated to the work of Pyke Koch, an important painter of the Magic (Neo) Realism. The Museum is in Utrecht, the city where Pyke Koch (1901-1991) studied and lived until 1986.

As a consequence of Koch’s perfectionism (and also because he destroyed work that he did not consider good enough) his body of work is not very extensive.  However, due to his virtuosity, and the intriguing balance between form and content it remains relevant.

Andreas Koch: Pyke Koch is one of the most important representatives of neo-realism in the Netherlands. He has left a small but unique body of work comprising some 120 paintings and 130 drawings and designs.

This modest body of work, which excels in technical perfection, puts Koch alongside the great masters of Dutch painting. His work is represented in the most prominent collections in the Netherlands.

In retrospect, Pyke Koch may be seen as one of the most important Dutch painters of the twentieth century. His art is penetrating and richly varied: challenging, sometimes hard and harsh, but also full of irony and humour, and sometimes sentimental and full of tenderness. On the one hand it reflects the complexity of his character, but on the other hand, however, by his layering and ambiguity, challenges the unambiguous singular autobiographical interpretation that authors often give to his paintings. 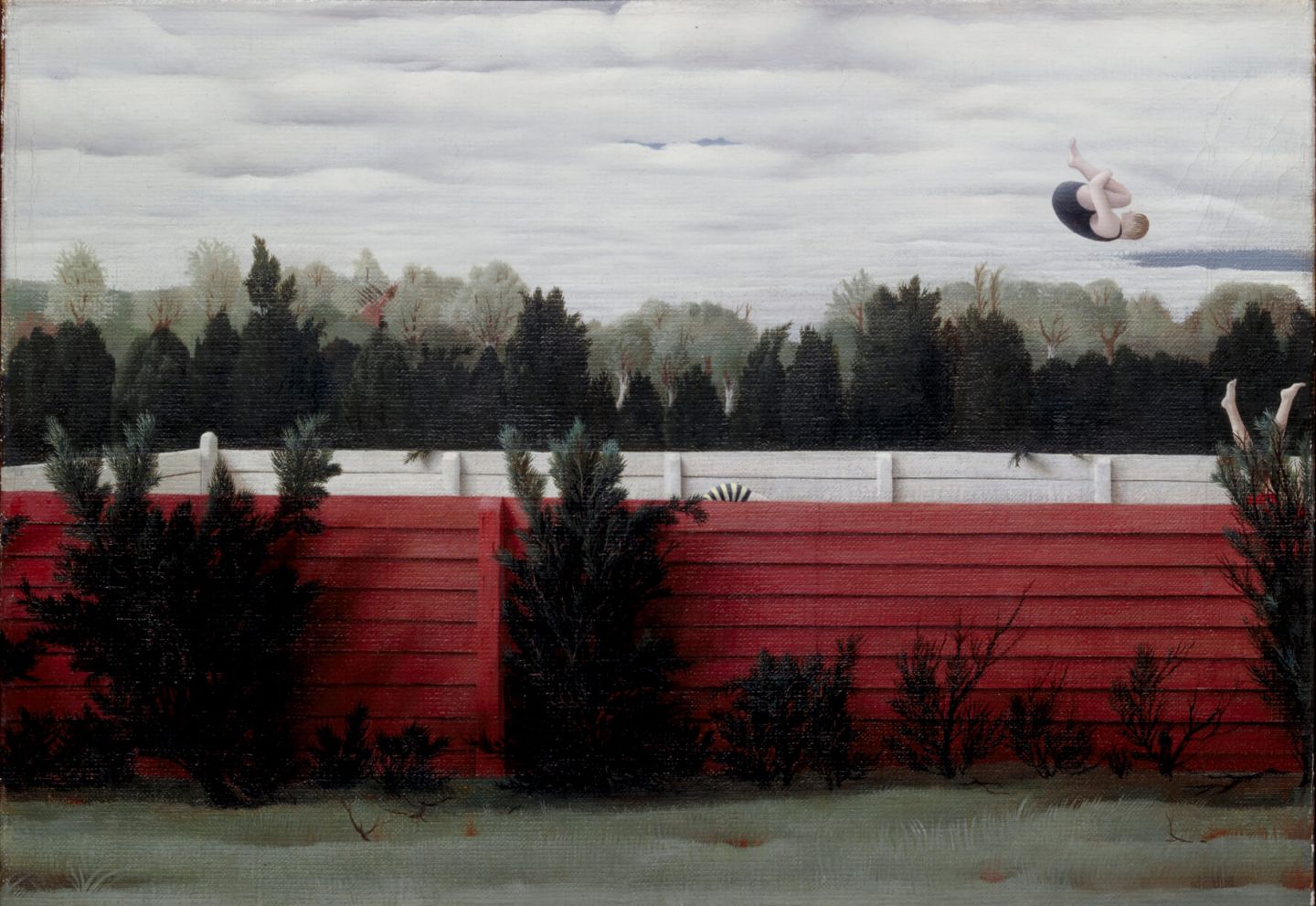 Koch considered the work of art to be much more important than the creator; who should, so to speak, disappear behind their work and not impose a compulsory significance; space should be allowed for the interpretation and the experience of the spectator.

In accordance with this artistic conviction he avoided publicity. Often he was not even present at the opening of exhibitions in which he participated, and never gave interviews. On a first encounter he gave the impression of a somewhat reserved gentleman rather than of an artist. In social intercourse he was known as an engaging personality, sensitive, intelligent, witty, with exceptionally sharp powers of perception and psychological insight but, most importantly, with an absolute devotion to his art.

In the exhibition, a link is made with paintings from artists such as Carel Willink, Raoul Hynckes and Charlie Toorop, a good friend of Koch, who set him on the path of painting, as well as with those of the related German ‘Neue Sachlichkeit’: Georg Grosz, Anton Räderscheidt, and Christian Schad.  Was his work known abroad at the time and did Pyke Koch maintain contact with foreign artists and movements?

Andreas Koch: Pyke Koch’s work has always been known to a small audience of foreign artists and movements. But he himself made little effort to get more international recognition for his work.

He admired ‘modern’ foreign artists of the ‘Neue Sachlichkeit’, as well as artists such as the Douanier Le Rousseau, Chirico, Duchamp, Picasso (Piet Kassa). The Italian Renaissance had a great influence on his work. He had a lot of admiration for Andrea Mantegna and Piero della Francesca.

Unfortunately, we cannot avoid asking a question here about Koch’s short-lived affinity with fascism, although many of his friends, artists and writers, were active in the resistance during the Second World War. 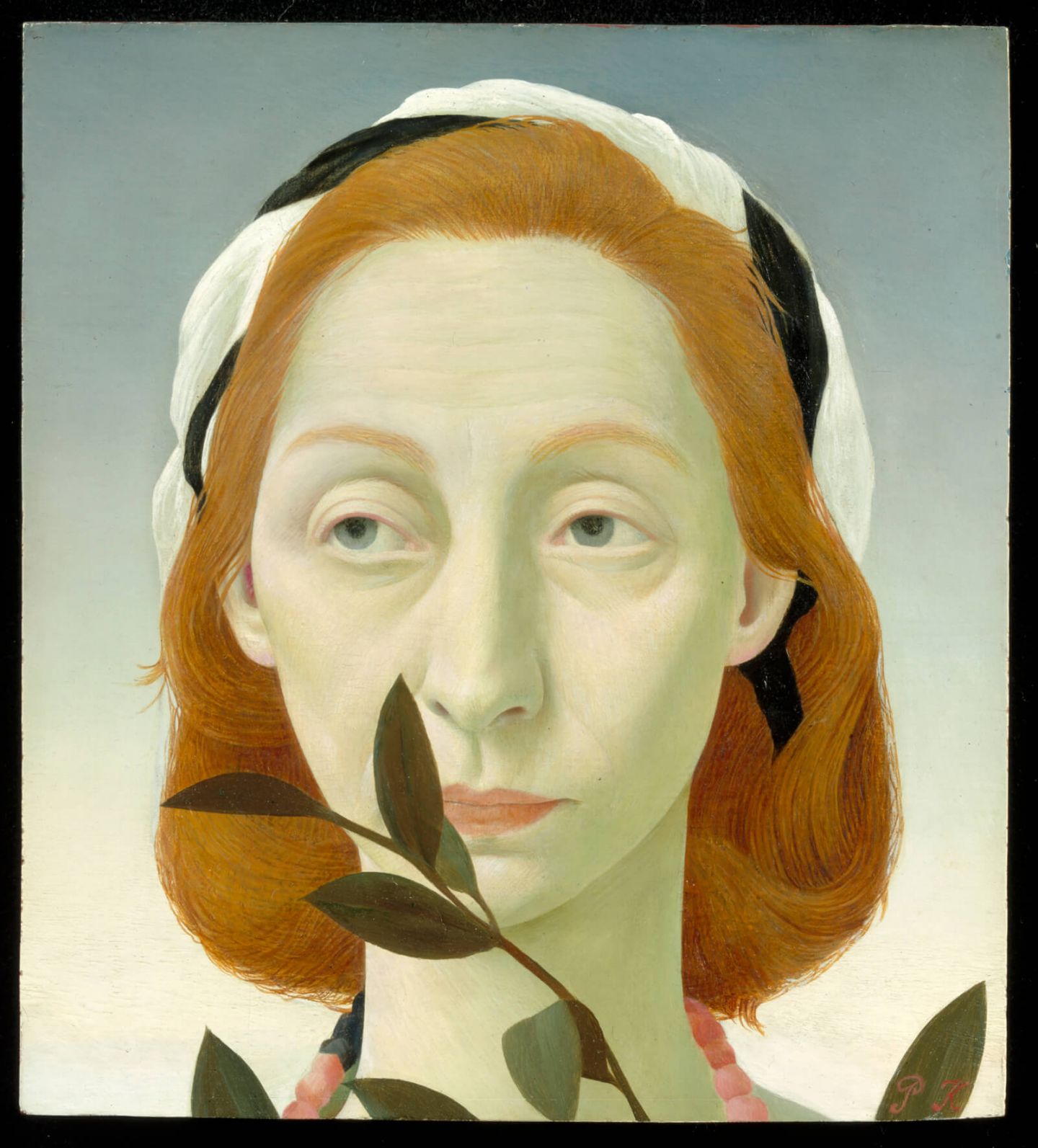 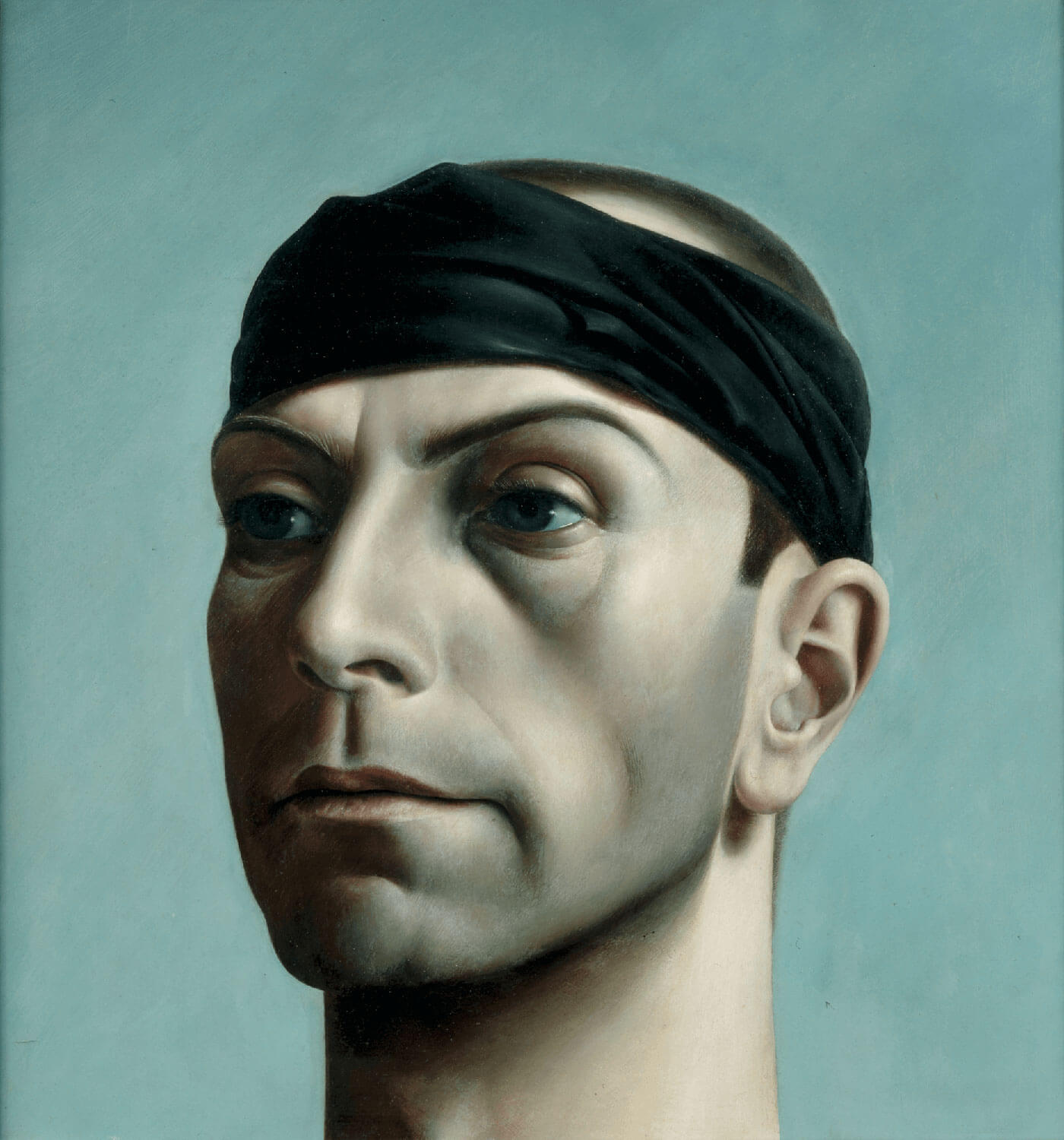 Andreas Koch: Pyke Koch was both loved and reviled. The Second World War brought a major turning point in the perception of the person and of his work. Before the war, his art was widely appreciated. After the war, realistic art was banned and the work of Koch and the magical-realists was rarely exhibited for a long time. No doubt his initial sympathies for fascism played a role here. But since the 1970s, appreciation of Koch’s work has grown again.

In  “Kunstschrift (nr 1, 2010)“ he was described by Mariëtte Haveman as ‘A sphinx in the art of the low countries……His personal universe, and his penchant for fascism made him elusive. The quality of his work is undisputed.’

Andreas, a few years ago you took the decision to set up the Foundation Pyke Koch in which Professor Carel Blotkamp, and Mieke Rijnders, the most important investigators of Koch’s work are closely involved. What made you decide to do this?

Andreas Koch:  In 2012, I co-founded the Pyke Koch Foundation *(PKS hereafter). The PKS aims to conserve and continue Koch’s legacy. But from the outset, my main motivation for the establishment of the Foundation was to celebrate my grandfather’s complex world and to make his work more accessible to a wide audience.

One of the objectives of the PKS is to exhibit his body of work to a wider international audience. 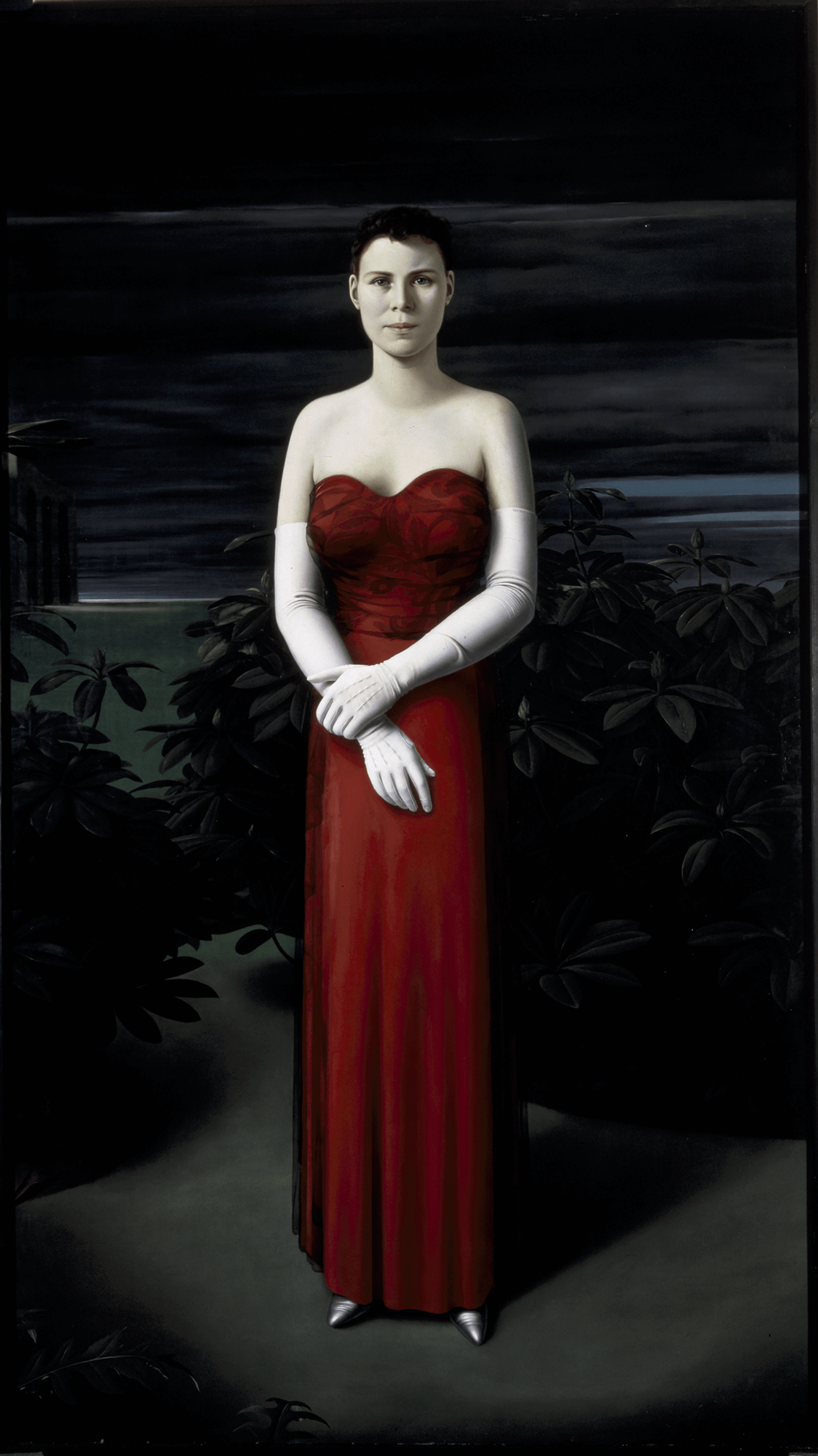 How does the Foundation support this exhibition in Utrecht?

Andreas Koch: The PKS and Koch’s heirs do not agree with the heavy emphasis on the war in this exhibition. One of our goals is to bring more nuance to the imagery surrounding Pyke Koch. However, our cooperation with the museum is progressing well. We have been able to lend out never-before-shown archive material (from the Pyke Koch Archive at the RKD (the Art Archives of the Netherlands) to the museum.

Also, I have written an article about my memories of my grandfather for the exhibition catalogue. The PKS manages the Pyke Koch rights on behalf of Koch’s heirs and together with the museum we determined which material would be publicly released.

Does Koch’s work have an impact on that of young artists?

Andreas Koch: No one knows Pyke Koch and everyone knows Pyke Koch, you know, although almost no one knows anything about the man Pyke Koch. Young artists are particularly fascinated by the timeless nature of his work. Kor Postma referred to Pyke Koch as ‘the most intelligent artist of the Netherlands’…whether you like his work or not…his world continues to fascinate. 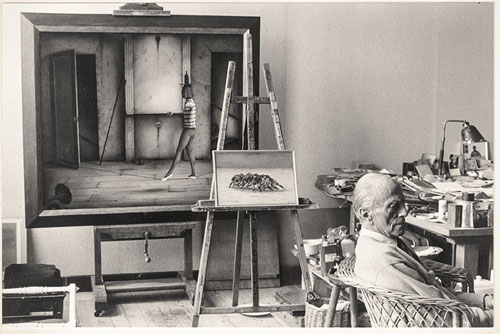 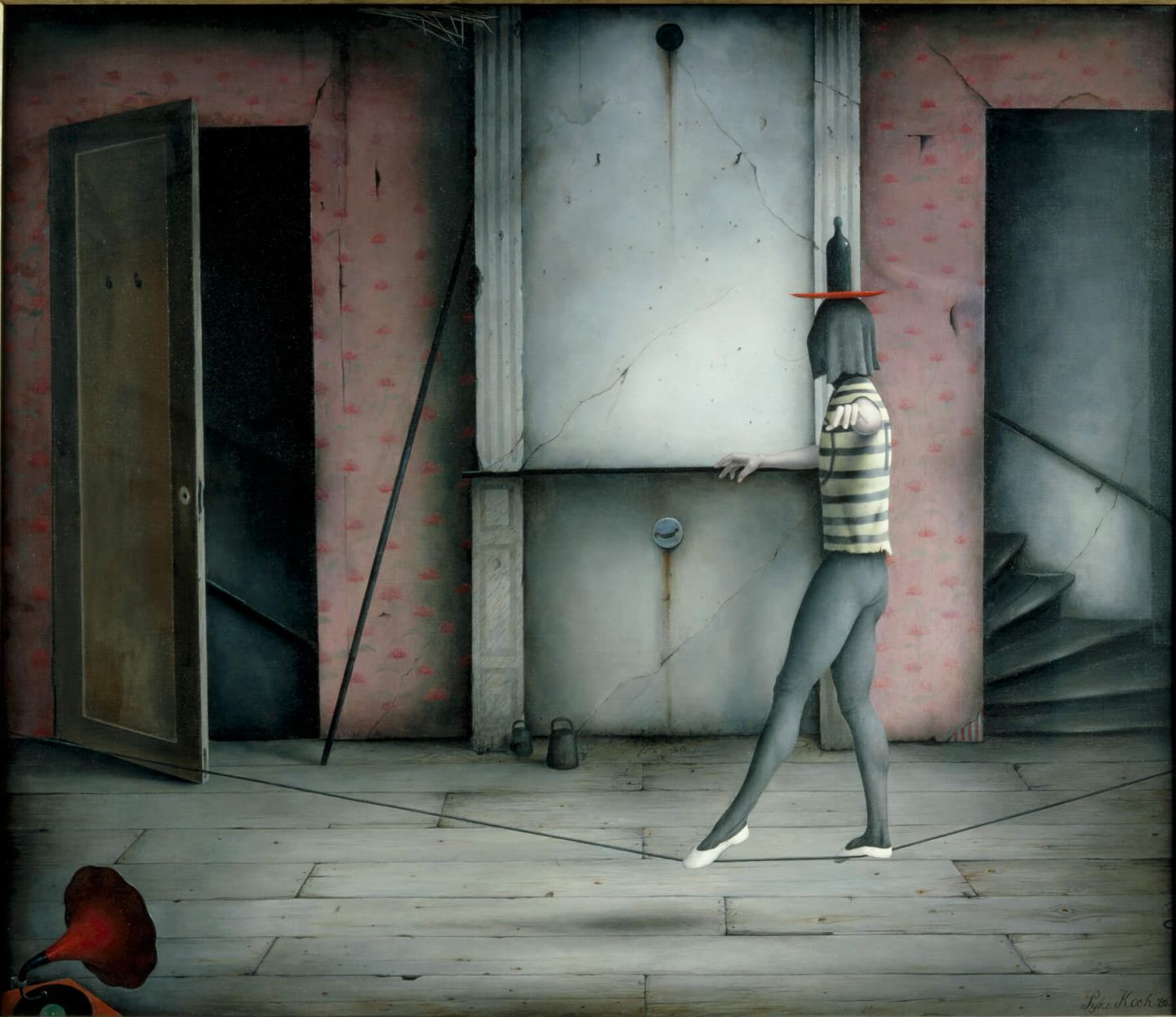 Pyke Koch was your grandfather: what are your strongest memories of him?

Andreas Koch: Pyke Koch, my talented grandfather, was a fascinating and inspirational personality: sensitive, intelligent, and witty. He was anti-authoritarian, hated narrow mindedness and sparked my curiosity.

As the son of a diplomat I grew up in a turbulent world in different countries: a world of travel, interesting meetings, receptions, cocktails and dinners. The tranquil moments with my grandfather were a welcome contrast to the turmoil of my international existence. Our moments together at ‘Oudegein’, my grandmother’s family estate in the province of Utrecht, were the backbone of my childhood.