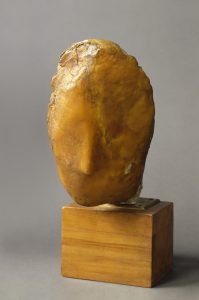 The Pulitzer’s fall exhibition examines the work of Medardo Rosso (1858–1928), a critically important, if under-recognized artist who played a crucial role in the development of modern sculpture. Medardo Rosso: Experiments in Light and Form explores the Italian artist’s radical efforts to render sculpture ephemeral and seemingly insubstantial through changing effects of light. It is the largest and most comprehensive Rosso exhibition to be presented in a U.S. museum, with nearly 30 sculptures—the majority of which have never been seen in this country—as well as about 40 photographs and 30 drawings.

With his unheroic subjects, from street urchins to nursing children, bookmakers, and more, as well as his efforts to “dematerialize” sculpture by rendering it sensitive to light, Rosso helped to expand the definition of sculpture for the modern era. His heads and figures appear to be caught in fugitive visual, physical, or emotional states. Fleeting “impressions” of modern life, they stand in marked contrast to the monumental, idealized depictions typical of so much traditional sculpture before and during the 19th and early 20th centuries.

Medardo Rosso: Experiments in Light and Form showcases the ways in which Rosso employed innovative methods of modeling in order to animate the surfaces of his works, in a way perhaps even more radical than his contemporary—and admirer—Auguste Rodin. The exhibition emphasizes Rosso’s unorthodox foundry techniques, in which he returned to the same subjects repeatedly, casting them in plaster, bronze, and wax, and frequently leaving behind evidence of the casting process that is traditionally removed. By intervening at various stages of the process, as well as with the finished sculptures, he rendered his highly worked surfaces sensitive to subtle illumination—effects that will be given new meaning by the mutable natural light in the Pulitzer’s galleries.

In addition to experimenting with sculpture, Rosso also elicited illusions of transience through photography and drawings. The exhibition includes photographs of his sculptures captured under various lighting conditions—including images that have been collaged, painted on, or cropped, and some photographs of photographs. Examples of Rosso’s drawings include intimate glimpses of figures engaged in everyday activities, as well as views of rooftops, city squares, and abstracted landscapes. Highlighting a lesser-known and heretofore little-studied facet of his oeuvre, they are presented as integral to the artist’s efforts to understand the effects of light.