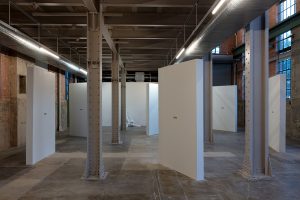 For this exhibition, the Italian artist Pietro Roccasalva (b. 1970 Modica, Italy) presents a site-specific installation and a one-night performance. The work on view includes a new series of paintings, monochromes based on works by the Italian Futurists, three paintings from the ongoing series Il Traviatore and a sculpture.

In 1908 the Italian poet F.T. Marinetti wrote the futurist manifesto encompassing a focused view toward the fire of the sun and a rejection of the past. Fearlessly speeding toward the eternal absolute, the futurists believed that time and space died yesterday, therefore the past does not exist. Collectively, the work on view inverts the Futurist perspective, turning the sun’s gaze in the opposition to its protagonists. Let’s go!’ I said. ‘Friends, away! Let’s go! Mythology and the Mystic Ideal are defeated at last. We’re about to see the Centaur’s birth and, soon after, the first flight of Angels!… We must shake at the gates of life, test the bolts and hinges. Let’s go! Look there, on the earth, the very first dawn! There’s nothing to match the splendor of the sun’s red sword, slashing for the first time through our millennial gloom!

For Roccasalva, painting is the cynosure of a project inclusive of sculpture, performance, video and installation. His expanded working method proposes a complex set of interconnected structures and strata that fall into non-linear relationships and timelines. In his work, time is conflated, collapsed and debased through a painting project that is both conceptual and anagrammatic.

The installation follows this expanded logic in its distribution of thirteen freestanding walls across the Power Station’s two levels. Partitions serve a practical function as display for the paintings, while offering a backdrop and stage to the performance. Situated at opposing temporal poles, Roccasalva’s monochromes are simultaneously D’apres (After) examples of Futurist paintings and the Imprimitura of future paintings. Suspended between D’apres and Imprimitura, the past and future, after and before, synchrony and diachrony, the paintings gesture to the past and, in doing so, move ceaselessly beyond the present into a speculative future. Each “polychrome” results from a process of approximation and synthesis: Roccasalva blends the complete range of chromatic information from the historical source material into a singular, monochromatic field of Imprimitura. 18k gold nails fix the canvas to the support, signifying a gap between past and future – like the gold spikes used in geological sites to mark the transition between two eras or a symbolic representation of the sun. Suspended between D’apres and Imprimitura, the panels offer a threshold. In them, one observes both a possible future and its historical necessity.