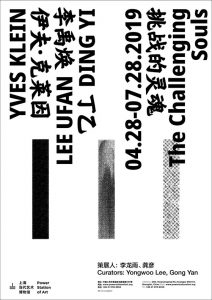 In April 2019, the Power Station of Art presents ‘The Challenging Souls’, a unique exhibition showcasing avant-garde artists Yves Klein, Lee Ufan and Ding Yi. Coming from different cultural backgrounds of the west and east, these three artists polarise, to this day, the relentless pursuit of art through experimentation, innovation and exploration. Individually and collectively, they have invented new artistic languages, media and art forms by challenging existing conventions and trends.

This is the first time the works of Yves Klein and Lee Ufan are shown in China under a common artistic umbrella with their Chinese colleague Ding Yi.

This collaboration opens a new appraisal of avant-gardism in the second half of the 20th century, over seven decades and cascading three generations. These artists pioneered various points that could breathe with the public by introducing unique material, colors, and performance elements into the non-popular, elitist, metaphysical contexts of avant-garde art. Furthermore, the artists’ origins from different cultures, times and locations opened new horizons for the comparative study of avant-garde art between the west and the east. Their works challenge us to reassess our relationship to art, society and the public in the global, cross-cultural context we live in.

This awareness raises the fundamental question of what drives the insatiable rejection of the conventional through experimentation, and whether art is merely an aesthetic tool for self-expression or a medium to create social awareness through political and social reflections. Ultimately, it provides a platform for art historians to dissect the differences and commonalities between two seemingly opposing cultural standpoints.

‘The Challenging Souls’ is therefore a research project which examines the trajectory of the experimental art movement, comparing the visual languages of three artists who have prevailed social changes and upheavals since the 1960s. In doing so, one also has to discount the rise of the contemporary art market and its implications on values and artistic power. The return to experimentation, in any art form, is probably the biggest lesson we learn in order to push back the boundaries of our artistic inclinations.