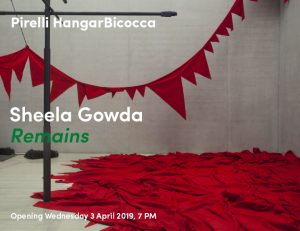 Sheela Gowda (Bhadravati, Karnataka, India, 1957; lives and works in Bangalore) is one of the leading names in contemporary art in India. “Remains” is the first major solo show of works by Sheela Gowda in Italy and it is a unique opportunity to discover more than twenty years of the artist’s production. The exhibition includes a wide selection of site-specific installations and sculptures, as well as watercolors and prints, ranging from 1996 through the present day, in addition to a new production conceived for the space of the Navate of Pirelli HangarBicocca.

Sheela Gowda has developed her practice through a constant dialog and exchange between local artistic traditions and international forms of art. She initially trained in painting in an academic context shaped by a remarkable Indian modernist tradition, along with a contemporary interpretation of popular imagery and craftsmanship. Returning from London in the mid-1980s after completing her studies at the Royal College of Art, Gowda started her transition from the pictorial space to three-dimensional works, through direct manipulation and confrontation with a series of new materials that she gradually added to her work, such as hair, incense, pigments and cow dung.

The exhibition attempts to highlight both Gowda’s poetic and her political practices, grounded on a thoughtful and perceptive view of the world, accompanied by an awareness of the symbolic and communicative value of matter, objects and their remains.

For the artist the liturgy—the transformative ritual that occurs during a highly performance-based process of manipulation, confrontation and conversation with her materials—remains fundamental. Sheela Gowda redefines the pathos of things, their feelings and affections; a relational condition between objects, their reasons for being and their behaviors. It is a “moment of encounter,” understood not as a moment in time but as a kind of force that allows a particular set of circumstances to come together.