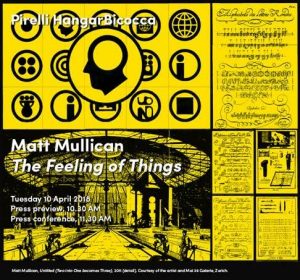 Tthe most extensive retrospective ever staged of the work of Matt Mullican (Santa Monica, California, 1951), a renowned American artist, active since the start of the 1970s and a pioneer in the use of hypnosis as a performance practice in art. The exhibition, which presents thousands of works, immerses the visitor in the articulate cosmology of the “five worlds” conceived by the artist: a particular system of representation of reality made up of images, pictograms, icons, codes, signs, symbols and colors. A visual vocabulary capable of interpolating traditions, scientific studies, beliefs and cultures of different times and places in order to ponder the age-old existential questions and the most profound and hermetic aspects of life.

Pirelli HangarBicocca hosts more than forty years of work by Matt Mullican, starting from the 1970s when, as a pupil of John Baldessari, he attended the California Institute of the Arts in Valencia (USA), the school supported by—among others—Walt Disney, right up to recent works (dated 2018), produced especially for the Milan exhibition

The exhibition itinerary as a whole presents us with the artist’s prolific production and the extraordinary variety of media used: sculpture, large-scale installations, paper-based works, as well as ones in glass, stone, metal, posters, multiples and editions, neon lights, photographs, paintings carried out using the frottage technique, videos, performances, lightboxes and computer-based projects as well as virtual reality. There is also a vast selection of his iconography: Mullican draws on elements taken from the world of film and comics, from contemporary communication icons, from the signposting in airports and images derived from various traditions—such as Hindu mandalas, tantric imagery and Hopi Indian symbols—not to mention sources of a primordial nature (also relative to the idea of birth and death, of fate and destiny), as well as from scientific illustrations, giving rise to his personal pictograms (“Signs”).

The exhibition, curated by Roberta Tenconi, occupies the 5,000 square meters of the Navate of Pirelli HangarBicocca. Visitors are invited to explore this space, moving through a major rectangular architectural structure, split into five areas of different colors, the connotations of which hark back to the iconic cosmologies of the artist.