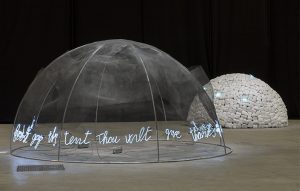 This show by Mario Merz (Milan, 1925–2003 is bringing together his most iconic group of works: the igloos, dating from 1968 until the end of his life.

Curated by Vicente Todolí, Artistic Director of Pirelli HangarBicocca and realised in collaboration with Fondazione Merz, the exhibition is hosted in the spaces of the Navate and the Cubo of Pirelli HangarBicocca, placing the visitor at the heart of a constellation of over 30 large-scale works in the shape of an igloo: an unprecedented landscape of great visual impact. 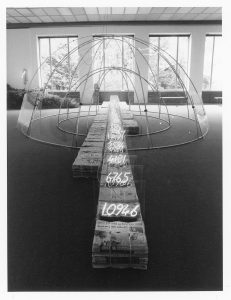 Fifty years since the creation of the first igloo, the exhibition provides an overview of Mario Merz’s work, of its historical importance and great innovative reach. Gathered from numerous private collections and international museums, including the Museo Nacional Centro de Arte Reina Sofía in Madrid, the Tate in London, the Nationalgalerie in Berlin, part of the group of the Staatliche Museen zu Berlin, and the Van Abbemuseum in Eindhoven, the igloos will be displayed together in such a large number for the first time.

Mario Merz’s practice developed in Turin from the ’50s onwards. A key figure of Arte Povera, he was one of the very first in Italy to use the installation medium, breaking through the two-dimensional nature of the picture by including neon tubes in his canvases and in everyday objects, such as umbrellas and glasses.

Through his work, he investigates and represents the processes of transformation of nature and human life, using elements from the scientific-mathematical field, such as the spiral and the Fibonacci sequence, and, from 1968, introducing what would remain one of the recurring and most representative motifs of his practice for more than 30 years: the igloo.