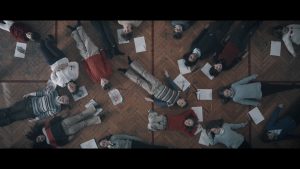 the solo show of the work by Eva Kot’átková (Prague, 1982) is conceived as a path of imagery and words, a labyrinthine and surreal world that invites us to produce dreams and develop our imagination, highlighting individual fantasies, fears and the challenges of contemporary society.

For the exhibition, curated by Roberta Tenconi, Eva Kot’átková has developed an original and immersive project in which existing works are placed side by side with new productions, including installations, sculptures, over-sized objects, collages and performances. Starting from a vision of the human body as a machine, a great organism of which the functioning requires checking, regeneration and rest, and from the idea of sleep as a moment in which, through our dreams, we come up with new visions and enter parallel worlds, the exhibition explores our most intimate projections and thoughts, as well as the angst and disorientation of contemporary living.

It brings together a wide selection of works, including the installation and video Stomach of the World, 2017, and the series of sculptures Theatre of Speaking Objects, 2012, in addition to new projects such as the installation The Dream Machine is Asleep, 2018, which invades the space with a giant bed, an oneiric generator of stories and ideas. The entire show is conceived as an organism which, through programmed performances, is brought to life and inhabited by figures who wander through the space, activating the works through simple static actions, with more complex choreographies or through the recounting of ad-libbed oral narratives.