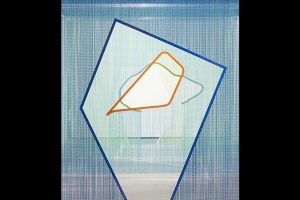 The work of Daniel Steegmann Mangrané (Barcelona, 1977; lives and works in Rio de Janeiro) ponders on the relationship between culture and nature. The artist’s interest in biology has led him to analyze complex ecological systems and introduce the natural world into his works. In Steegmann Mangrané’s practice numerous are the references to the rain forest in Brazil—such as branches, leaves, and insects—which interwoven with geometric forms and abstract motifs engender a reflection on the complex dynamics between the elements that surround us.

His first exhibition in Italy will present works made from 1998 to the present time, ranging from films, virtual reality devices, 2D holograms, sculptures, and installations. The artist will place the physical and sensory dimension of the viewer at the heart of the exhibition project, offering new visions of the entire corpus of his works as they dialogue with one another.