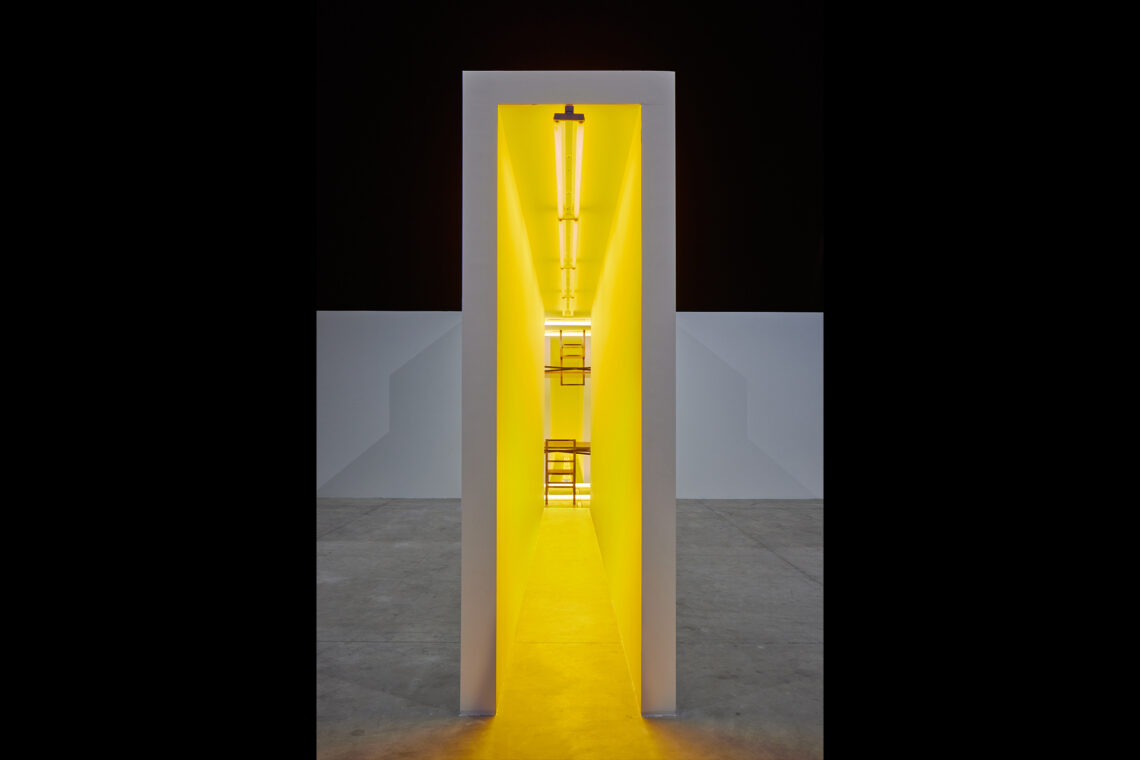 One of the world’s most prominent living artists, Bruce Nauman (b. Fort Wayne, Indiana, 1941; lives and works in New Mexico) has contributed to writing the history of contemporary art since the mid-1960s, thanks to his pioneering research across a variety of media, including installation, video, sculpture, performance, photography, drawing, and sound. His art is distinguished by an interest in understanding the human experience and its conventions, as well as the inner workings of the psyche, which he investigates through the perception of the body, and interactions with space, time, and language. Nauman’s work also makes frequent use of wordplay, with which he explores alternative methods of communication.
Organized in collaboration with Tate Modern in London (7 October 2020—21 February 2021) and the Stedelijk Museum in Amsterdam (5 June—24 October 2021), the exhibition at Pirelli HangarBicocca focuses on Nauman’s spatial and architectural practice. In addition to several works already shown in London and Amsterdam, the exhibition includes a large number of his iconic corridors and rooms. Highlighting interrelations, developments and formal variations, for the first time the show explores his diverse experimentation in the areas of spatial experience and architectural scale, as well as the use of light, sound, language and video in this corpus of work.

Nauman has also participated in numerous group shows and biennials worldwide, including the Venice Biennale (2015, 2013, 2007, 1999, 1987, 1980, and 1978) and documenta, Kassel (1992, 1982, 1977, 1972, and 1968). He has received numerous awards, including the Frederick Kiesler Prize for Architecture and the Arts, Austria (2014); Centennial Medal Laureates, American Academy, Rome (2009); Beaux-Arts Magazine Art Awards: Best International Artist, Paris, Praemium Imperiale Prize for Visual Arts, Japan (2004); and Honorary Doctor of Arts, California Institute of the Arts, Valencia (2000); and the Wolf Foundation Prize in Arts (Sculpture), Israel (1993). In 2009 he represented the United States at the 53rd Venice Biennale, winning the Golden Lion for Best National Participation, and in 1999 he won the Golden Lion for Lifetime Achievement at the 48th Venice Biennale.
The catalogue, published in conjunction with the exhibition, will present the most up to date studies on Nauman’s spatial and architectural research in its entirety, by analyzing and shedding light on his conceptual developments, formal variations and endless experimentations. Among the invited authors, Francesca Esmay, Gloria Sutton and Joan Simon.