Phi Foundation for Contemporary Art: Larry Achiampong “Relic Traveller: Where You and I Come From, We Know That We Are Not Here Forever” 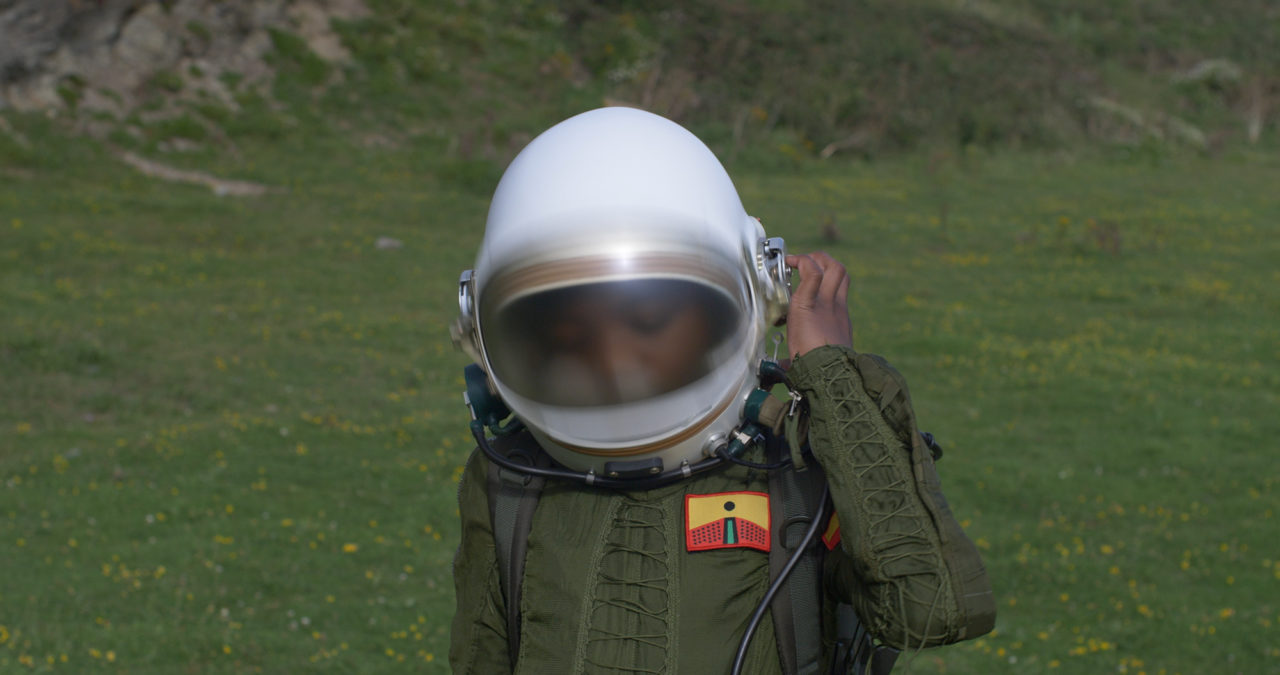 The PHI Foundation for Contemporary Art is pleased to present Larry Achiampong: Relic Traveller: Where You and I Come From, We Know That We Are Not Here Forever.

For Larry Achiampong’s first major solo exhibition in the Americas, the PHI Foundation for Contemporary Art presents Relic Traveller, an iterative, large-scale, multidisciplinary project ongoing since 2017. Taking the form of a series of immersive installations specially conceived for the Foundation’s spaces and for the city of Montréal, this exhibition is composed of sculptures, images, film, sound, and a public art component.

Through his futuristic alter ego, Achiampong is an archivist, collecting connections to his roots and gathering together the voices of collective memory to rethink colonialism, postcolonialism, Africanism, and Pan-Africanism. These reflections generate a unique vocabulary that problematizes and resists current discourses and trends. What, and who, is marking and shaping history, and who is allowed to leave a trace? Achiampong’s experience of diaspora, the importance of family and genealogical roots, and the significance of preservation and imagination all contribute to his project of creating a universe for everyone. Relic Traveller builds on themes of lost testimony, fallen empire, and displacement, marking and questioning what is remembered and what will remain. A constantly evolving project, Relic Traveller speaks to the artist’s personal journey, which is presented as an archive and as documentation of his vision of the future.

The exhibition consists of three interrelated installations. The Relic Travellers Alliance: Assembly 1 & 2 (2021) is a brand-new work that introduces us to two major aspects of the artist’s cosmology: spacesuits and flags. The presentation of Achiampong’s specially designed spacesuits suggests a tension between the agency of a body in flight and resistance to the tenets of ethnographic display. The spacesuits are brought into conversation with the series of flags PAN AFRICAN FLAG FOR THE RELIC TRAVELLERS’ ALLIANCE (2017-2021).

The Relic film series—comprised of Relic 0 (2017), Relic 1 (2017), Relic 2 (2019), and Relic 3 (2019)—is presented throughout the week in an alternating sequence. A new work, Reliquary 2 (2020), joins the series. Composed of animated sequences and heretofore unseen drone footage from Achiampong’s personal archive, this film is the artist’s response to the COVID-19 pandemic and the subsequent lockdown that temporarily separated him from his two children. The films are screened alongside Achiampong’s original 2017 series of flag works, mentioned above, which are presented in a unique configuration. The flags will also be presented in an outdoor poster campaign, to be seen in specific locations around Montréal.

The exhibition will also feature Reliquary Conceptual Imagery (2020), a mural installation composed of illustrations from Achiampong’s film Reliquary 2. These images were created for the film by Wumi Olaosebikan, a.k.a. Wumzum, a professional illustrator, muralist, and animator based in London and a long-term collaborator and friend of the artist.

Both anticipating and responding to the present moment, Larry Achiampong’s works address race, class, history, and technology to imagine the future through a very personal lens. Even as our experience of time has been altered by the pandemic, and as certain historical inequalities have been made more visible, we too may be compelled to reflect on what is, and to envision, boldly, what is to come.

Larry Achiampong
Larry Achiampong’s solo and collaborative projects employ imagery, aural and visual archives, live performance, and sound to explore ideas surrounding class, cross-cultural, and post-digital identity. With works that examine his communal and personal heritage—in particular, the intersection between pop culture and the postcolonial position—Achiampong crate-digs the vaults of history. These investigations examine constructions of “the self” by splicing the audible and visual materials of personal and interpersonal archives, offering multiple perspectives that reveal entrenched sociopolitical contradictions in contemporary society.

Achiampong completed a bachelor’s degree in mixed-media fine art at the University of Westminster in 2005, and a master’s in sculpture at the Slade School of Fine Art in 2008. In 2020, he was awarded a fellowship by the Stanley Picker Gallery in London, and received a Paul Hamlyn Foundation award in recognition of his artistic practice in 2019. He lives and works in Essex and was a tutor with the photography master’s program at the Royal College of Art between 2016 and 2021. He was shortlisted for the Jarman Award in 2021. Achiampong currently serves on the board of trustees at Iniva (the Institute of International Visual Arts), facilitating the formation of art policy in the UK and internationally. He also holds a seat on the board of trustees of the Elephant Trust. Achiampong is represented by C Ø P P E R F I E L D.