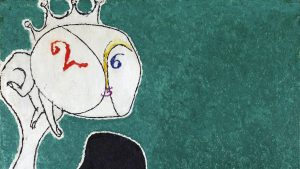 At the twenty-ninth Venice Biennale in 1958, an artist from the Italian region of the Marches, Osvaldo Licini (1894–1958) was awarded the Grand Prize for painting, a homage to one of the most original and elusive personalities of the Italian art scene of the first half of the twentieth century. Sixty years after that important recognition and his death, the Peggy Guggenheim Collection commemorates the great master with this long-awaited retrospective.

Eleven exhibition galleries and over one hundred works retrace the disruptive and tormented artistic path of this artist, whose career was characterized by moments of crisis and seemingly sudden stylistic changes. Licini placed painting itself at the center of his artistic research, constantly rethinking his works through anguished experimentation that was never truly completed. With this retrospective, Barbero intends to convey the substantial coherence of this path. Apparent breaks are actually the stages of a singular experience that stand out in the history of twentieth-century art for their absolute lyricism and poetry.

Licini studied in Bologna, a city rich in art and culture due to the presence of other young contemporaries such as Giorgio Morandi and artists active in the Futurist movement, but he was not satisfied by the Italian scene. Thanks to repeated visits to Paris between 1917 and 1925, Licini soon became one of the Italian artists most aware of the international developments in painting. This was likely a factor that contributed to his independence within the Italian art scene, without ever really belonging to movements or groups, a stance reiterated by the choice to return to the isolated village of his birth, Monte Vidon Corrado. Here he lived and breathed the landscapes of the Marches, whose hills Giacomo Leopardi famously described in his poetry and to which Licini consistently returned in his painting. They were the subject of his first figurative phase of the 1920s, as seen in Landscape with Man (Montefalcone) (Paesaggio con l’uomo [Montefalcone]) from 1926 and Landscape of the Marches (The Trough) (Paesaggio marchigiano [Il trogolo]) from 1928. These views with their curved horizon line are the background in the subsequent transition from figuration to abstraction of the early 1930s, seen in Imaginary Landscape (Billy Goat) (Paesaggio fantastico [Il capro]) from 1927.

In an attempt to break away from Italian art, which was increasingly dominated by the sort of realism that was supported by the Fascist regime, Licini turned to nonfigurative work and partook in the cultural ferment of 1930s Milan, the driving force of Italian abstraction and Rationalism. It was inevitable that he would become involved in the activities of the Galleria Il Milione. While exhibiting in 1935, Licini nevertheless maintained an independent position, together with artists such as Fausto Melotti and Lucio Fontana, whose sculptural experimentations from 1934–35 are included in the exhibition. Licini’s abstract language is atypical, attentive to geometry but also to the chromatic intensity that strongly enters the compositional structure, always avoiding flat and compact backgrounds in favor of pictorially sensitive and vibrant surfaces. It is a geometry that is permeated with lyricism and turned into sentiment, evident in works like Castle in the Air (Castello in aria) from 1933–36, or Obelisk (Obelisco) from 1932. Such a particular stance could only attract equally sophisticated collectors and the interest of many Italian intellectuals.

Licini’s career and masterpieces dedicated to the Flying Dutchmen, Amalasunthas, and Rebel Angels hang in “unstable balance” (the title and subject of various works of the 1930s) between abstraction and representation. It was in these masterpieces that his “characters” begin to appear, as letters or symbols with a mysterious meaning. Licini’s most iconic works are those dedicated to the subject of Amalasuntha, presented as a group at the Venice Biennale in 1950. In the artist’s own words, they depict “our beautiful moon, guaranteed silver for eternity, personified in few words, friend to every weary heart.” The numerous Amalasuntha paintings on exhibit present the many facets of Licini’s personality, from the lyrical and contemplative side to the more ironic and irreverent one. In the works created since the late 1940s, themes, styles, and unresolved thoughts on painting all converge and make Licini emerge as a great protagonist of Italian and international modernism, as confirmed by the award conferred a few months before his death at the Venice Biennale in 1958. A photograph taken on that occasion portrays Peggy Guggenheim visiting Licini’s exhibition gallery, attesting to her interest in the work of the artist.

The exhibition is accompanied by a comprehensive illustrated catalogue, published by Marsilio Editore in Italian and English with essays by Luca Massimo Barbero, Chiara Mari, Federica Pirani, and Sileno Salvagnini.