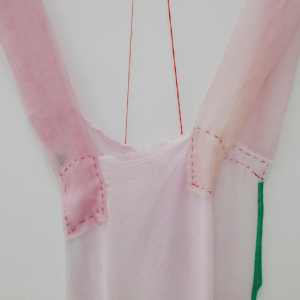 Artist Luke Ching shares Italo Calvino’s fable about a city in which every citizen is a thief:they maintain everyday life by breaking into neighbours’ homes and stealing from one another until the arrival one day of an “honest man” who does not steal, throwing the town’s ecology into disequilibrium. Some continue stealing while others close their doors and hire workers to steal for them. Eventually, wealth gaps and class divisions start to emerge, and a security system is established.

Bicycle Thieves is interested in the fine line between sharing and stealing. Paying tribute tothe eponymous Italian neorealist film in which a worker spends all his family savings to buy the bicycle needed for a new job but ends up losing the bike at the hands of a thief onhis first day of work, the group exhibition extends the film’s concern to a contemporary context and highlights individuals’ precarious status as situated within increasingly trick yrelations to various institutions and systems.

If we are to find a bike embodying the Zeitgeist of today, an invention once championed but soon bankrupted comes to mind: the bike sharing platforms. Juxtaposing the two imageries of bicycle, we speculate now with a seemingly farfetched question: could these shared bikes be a potential solution to the tragedy depicted in the movie of some seventy years ago? Under the fluctuating backdrop of technological development, economic transition and political aggression, what has changed and what has not? Who are the bicycle thieves today?

Whether in post World War II Italy or post internet China, bicycles epitomise the relationships between humans and the technical object as means of production. Labour is at stake here because it is an everyday form of public participation for each one of us. As both a platform for sharing and a den for bandits, Bicycle Thieves seeks to discuss the relations between labour and technology not only in digital economies, but also within the service sector, domestic work and contemporary art. More than one of the participating artists experiment with the unusual concept of “artist as service provider”, exploring subversive potentials within both the private domain and the realm of the imaginary.

Looking from the perspective of Hong Kong, there is a sense of uncertainty and crisis from the crossroads at which the city finds itself. Confronted simultaneously by global capitalism and the dubious Hong Kong mainland relationship, we are intertwined with leviathan infrastructures and conflicting systems. Now that the intimacies betweent echnology and power centralisation are widely acknowledged, how do we re–evaluate the labour of organising, the network and collective processes? Is it possible to borrow,appropriate and even reinvent technologies? With these questions in mind, BicycleThieves invites practitioners from various backgrounds to envision possibilities for alternative systems and diverse technological futures.

Para Site Art Space is financially supported by the Art Development Matching GrantsScheme of the Government of the Hong Kong Special Administrative Region.

Hanlu Zhang is a writer and curator based in Shanghai. She is also editor at artforum.com.cn. Hanlu received her MA in Art History, Theory and Criticism from the School of the Art Institute of Chicago in 2013. She received second place in the“International Award for Art Criticism” in 2014 and her writing can be found on LEAP,ArtReview Asia, Flash Art, and art–agenda. In 2015, she co–curated “Nightmare ofExhibition Part II: the Two–way Theater” at the Power Station of Art, Shanghai. She has also curated exhibitions at No Longer Empty and 49B Studios in New York, Yang ArtMuseum and 798 Photo Gallery in Beijing, among other spaces. Zhang is interested in art as public sphere, and she has participated in multiple collaborative projects/platforms such as OnPractice and Theater 44.

Zhang’s curatorial proposal for Bicycle Thieves was chosen from an international pool of submissions made as part of Para Site’s annual Emerging Curators programme, now in its fifth year. The programme offers full access to the institution’s resources and network, in supporting the development and presentation of the curator’s exhibition on site.