Onassis Stegi: “For Ever More Images? Designing a cybermachine for the 21st century” 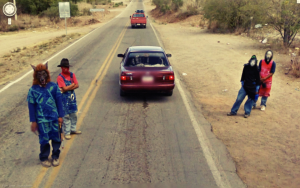 The exhibition takes a close look at 21st-century technical images as we transition from the pictorial to the algorithmic. The show contains 20 works, bringing 15 international artists and a research collective together into a single narrative in which documentation and artistic praxis are almost indistinguishable.

Taking as its starting point the optimistic, utopian Voyager project, which sent visual and audio traces of humanity and Earth into space, the exhibition created by Onassis Stegi focuses on the way in which contemporary images are produced, disseminated and perceived in the voided space of the Internet, algorithms and Big Data.

These artworks use as “raw material” images produced by low-res surveillance cameras and face recognition systems, mobile phones, social networks, Flickr and YouTube, Google search engines, Google Maps street view cameras, military thermal cameras and missile-mounted tracking cameras, software for creating photomosaics and 3D models, and laser scanning technologies; tactical media and black boxes; hidden algorithms and all-seeing eyes that record everything. To a considerable degree, these images shed light on the dark side of these technologies, which are used in the service of ever-tighter financial and biopolitical control. Are these meta-images? Are they images at all? Or are they just data maps and digital objects? However, the artists’ intensely critical viewpoint seems to open up cracks in the current visual regime, revealing the potential of anti-codes—visual and linguistic—as fields in which the political, social and ecological impasses we find ourselves in can be resisted and renegotiated.

Apart from the exhibition, For Ever More Images? includes an interactive cybermachine of images which constructs visual time capsules, and a series of lectures and workshops which invite us to take a fresh look at the way we produce, consume, understand and signify the images of our 21st century.