Tank Shanghai: ‘I do (not) Want to Be Part of Your Celebration’ 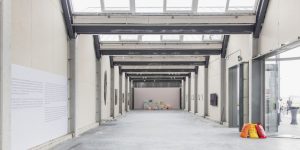 View of I Do (Not) Want To Be Part Of Your Celebration, Tank Shanghai Project Space, 2017. Photo: JJY.

It is problematic to identify an artist according to his or her age, gender, race or nationality. What the artists participating in this exhibition have in common is that they were born in China and studied abroad in USA, UK, France or Germany, which allows them to have global visions. Whether the artists chose to stay abroad, return to China, or to set up their studios in various places, they are present all over the world. Instead of regarding them as Chinese artists, they are artists from China who work in every possible locale. Therefore, the exhibition no longer deals with dual concepts such as global-local, western-eastern, but emphasizes the dynamics of each artist’s global position.

The floating status dictates that we are likely to follow the artists via screen or the Internet. This allows the artists to often propose the unfamiliar. Liu Xinyi’s Demo Graphics（2017）places an electronic temperature and humidity monitor next to each artwork included in the exhibition, in order to detect and compare the temperature and humidity changes surrounding the exhibits, while standing back as an observer. Similarly, Tant Zhong hides her artist’s hand in the invisible interactions between materials. Her recent experiment Sculpture (2017) shifts the focus from the sculptural to a plane, and reserves fragile contents about to disappear on a stable surface. Aspartime displays a stack of paintings that extract geometric shapes from online image banks, which dilutes the significance of each individual painting and simulates the everyday experience of selecting information from multiple websites opened simultaneously.

Some artists apply personalized methods to construct their own identities. Liu Wa’s Selfie Series（2016–17）is inspired by the popular phenomena of taking selfies to share on social media. The artist adds cultural elements to photographic selfies, and explores the changing roles she plays within society. Pu Yingwei’s autobiography The Western Guest, Marianne（2017）is integrated with his research on archival materials of a historical western figure: Marianne, which renders his own fictionalized identity both nomadic and public.

The limitations of being an artist will also be discussed in the exhibition. Yu Feifei’s As artists, we comment.（2017）satirizes the fact that artists may make comments about anything and yet may not make any difference. Tan Tian’s Easily Accessible Work（2017）questions if an artist could create something so literal that does not require interpretation. Zhu Tian’s on-going performance Cling To A Curator（2015–）uses cling film to bind herself to curators she works with, and observes changing power relations between the artist and the curator. He Shaotong’s tutorial video How To Be A Successful Artist（2017）even lists six essential steps that lead an artist to success.

If globalization implies a tendency towards a homogeneous and integrated celebration, the idea of global position stands beside that tendency and traces each artist’s individualized thinking and practice. It also represents issues faced by the artists: being consumed by repetitive exhibition requirements or judged by rigid, pre-existing criteria. When the artists attempt to criticize or solve something, they somehow celebrate the very existence of those issues whilst also generating further problems.