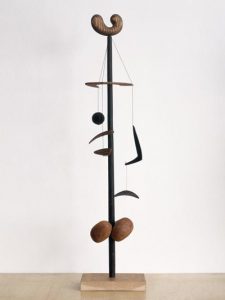 Curated by Noguchi Museum Senior Curator Dakin Hart, Self-Interned, 1942 brings together about two dozen works from the Museum’s collection, dating from before, during, and after Noguchi’s time at Poston, along with a substantial selection of archival documents. Together these evoke this harrowing moment in the history of American democracy, while revealing the impact that his experience at Poston had on Noguchi’s art.

February 19, 2017, marked the 75th anniversary of Executive Order 9066, the notorious wartime directive that authorized the internment of Japanese citizens and American citizens of Japanese heritage living in the Western United States. This exhibition explores Noguchi’s extraordinary decision—despite being exempt from internment as a resident of New York—to enter the Poston War Relocation Center, in the Arizona desert, hoping to contribute something positive to this forcibly displaced community, to which he had never felt more connected. In Noguchi’s words, “Thus I willfully became part of humanity uprooted.”

The exhibition opens with a roughly chronological installation of about a dozen sculptures dating from 1941, the year before Noguchi entered the camp, to 1944, the year after he returned to New York City. Together, these trace the development of his work during the crucial period when he made the transition from his early figurative work to the modernist style for which he became known. Later works in this section show Noguchi exploring working in wood, one of the few materials that was both readily available and workable with limited equipment. Other works show how, during the years immediately following his release from the camp, Noguchi vacillated between excoriating satire—as in This Tortured Earth (1942–43) and Yellow Landscape (1943), the latter of which implicates the entire planet in the toxic anti-Asian stereotyping that swept the United States following December 7, 1941—and such consolatory subjects as Mother and Child, a simple, near-abstract work in onyx from the last years of the war—but before August 6, 1945.

The exhibition concludes with “Gateways,” and “Deserts,” side-by-side displays of works dating from the mid-fifties to mid-eighties that testify to the enduring impact of Noguchi’s experience as a wartime internee. “Gateways” comprises about six of the artist’s signature voids, doorways, and donut-shaped suns: literal and psychological portals that he hoped would offer transport to alternative perspectives and other states of mind.

“Deserts” examines the ways that the fundamental qualities of the desert landscape—stripped down, flat, and deceptively simple—became integral to landscape references in Noguchi’s art. Works such as Cactus Wind(1982–83), for example, show him working low to the ground in an ascetic, wind-and-sand-scoured mode that is near impossible not to understand as relating to a state of mind; while Double Red Mountain (1969), a table sculpture in Persian travertine, demonstrates his talent for essentializing the way the desert isolates and de-scales its major physical features, an approach that became a blueprint for Noguchi’s later microcosmic landscapes.